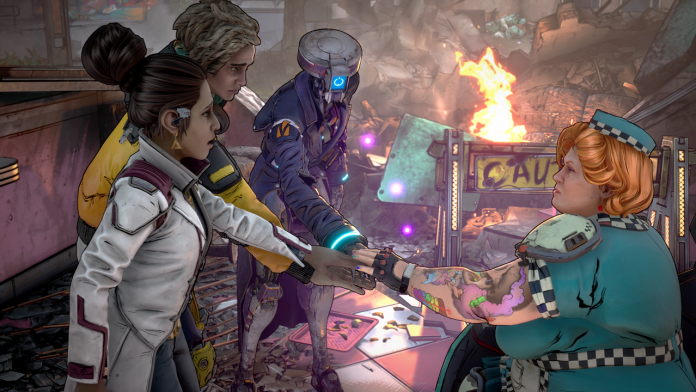 At PAX West, Gearbox Software presented the first extended look at the gameplay of New Tales From the Borderlands. Although Gearbox adheres to the storytelling style first developed by Telltale Games, this revival is preparing a lot of surprises.

The gameplay demonstration at PAX West demonstrated many familiar elements. Players will still have to make choices that will affect how the whole story unfolds, and decisions can be reflected and affect the results far into the game.

Along with the dialogue options, there will be quick events, and although failure in some of them may lead to unique results, others may prove fatal and final.

However, in addition to QTE and plot selection, Gearbox has added several unique gameplay elements to New Tales. There is a tribute to the gameplay, for example, one iconic stealth scene that you see in the gameplay reveal, as well as a new mini-game with a battle of figures around collectibles called Vaultlanders.

Screenshots of the gameplay of New Tales From the Borderlands

In New Tales From the Borderlands, you can collect new Vaultlander figures, each with its own unique characteristics and abilities. Then, when the time comes, you will be able to smash these figures in battles between toys.

New Tales From the Borderlands will be released on October 21, 2022. Despite the fact that the format will be episodic, each episode will be available at launch, and players will be able to choose which of the episodes to play, even if they are not in order (although we do not recommend playing this way).

Check out IGN to learn more about PAX West.

The D.C. President is Supposedly Almost Gone due to the cancellation...