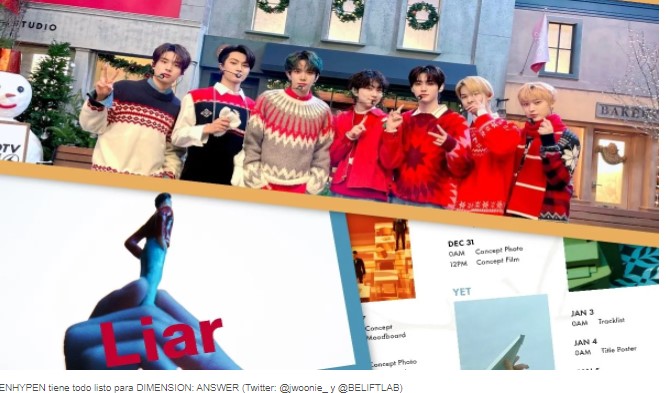 ENHYPEN’s comeback is getting closer and closer and with ‘DIMENSION: ANSWER’ we will have new songs from this group that prepares the world with the first previews for their next album.

Despite being a fairly young group in K-Pop, ENHYPEN has managed to gain a lot of relevance since its debut thanks to all the talents and abilities of each of its members, with great power and energy they have taken the stage to conquer millions of fans.

After a year of their debut, EN- has managed to become a Million Seller thanks to all the support and love that ENGENE has given to the idol group, proving that they have a bright future for the industry and much more to prove with their music.

This is why ENHYPEN started working on a new album, after their success with ‘DIMENSION: DILEMMA’, the artists of this K-Pop group started with new music to start in the following year taking the stage with their songs.

‘DIMENSION: ANSWER’ will be EN’s next album that everyone is waiting for and the boy band is thrilling their fans with the first teasers and the schedule of activities for this comeback.

What do you think the concept of ENHYPEN’s next album will be? Their tracks may not reveal anything at the moment, but we’ll have more of the idol group’s new music soon.

BELIFT LAB also revealed the schedule of activities for ENHYPEN’s comeback, DIMENSION: ANSWER will present more teasers in late December and early January; ending with the release of this album on January 10, 2022.

Have you got everything ready for ENHYPEN’s new album? 2022 will start very well with this new comeback of the idol group and the world cannot wait any longer to receive their new songs.

Lady Leshurr Has Been Charged With Assault

Timeline of Jamie Dornan and Amelia Warner’s Relationship: Inside Their Personal...