Home Entertainment Encanto: An explanation of each character’s gifts (and why they have them) 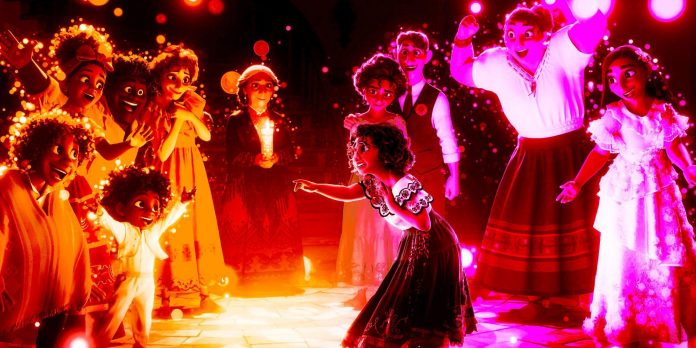 In Encanto, the descendants of Abuela Alma are endowed with supernatural gifts when they turn five, and each gift reflects something about each character. The special abilities of the Madrigals raised the family and also allowed them to better support their community. However, such high expectations had serious drawbacks in relation to each of them.

Having suffered great losses, fleeing from danger with her three children, Alma was saved with the help of a magical house and an ever-burning candle, which endowed each of her descendants with a special power. The Madrigals believed that their abilities were what made them special, and so it was especially devastating when Mirabelle didn’t get one for her fifth birthday. Mirabelle was determined to prove her worth despite her lack of gift, prompting her to look for a way to save the magical Disney musical when their house began to fall apart.

No matter how amazing the Madrigals’ abilities were, they were also accompanied by a burden that each character had to overcome. Their abilities reflected aspects of their personalities, revealing something in each of them that they might never have shared otherwise. Here are the gifts of each character in Encanto and why they had them.

The matriarch of Madrigal, Alma, technically did not have her own power, but without it, no one else would either. Alma was given a magical Encanto to raise her triplets and honor her late husband’s sacrifice to give them a better life. As the keeper of the candle, which never burned out and bestowed supernatural gifts to her descendants, Alma played an important role in protecting her flame and ensuring the continuation of the magic. Thanks to her, her family in Encanto was able to support the community with their gifts, as well as honor the name of Madrigal. However, over time, Alma became so fixated on preserving the flame and its legacy that she stopped seeing anything else, including how she actually harmed her family. Abuela Alma was unchangeable, like an eternal, never-ending candle.

Pepa, one of Alma’s three children, was given the opportunity to control the weather with her emotions. Every time she felt depressed or upset, a thundercloud appeared over her head, which grew and shrank along with the intensity of her feelings. From a young age, Pepa had to keep herself in check for the sake of everyone around her, never being able to fully reveal her feelings without facing very immediate consequences. In the song “We’re not Talking about Bruno”, she said that she had to celebrate her wedding during a hurricane due to the fact that her powers were out of order. She has many ways to deal with emotions, such as stroking her hair and repeating soothing mantras to herself, but they are rarely enough to properly tame unpredictable weather, since Alma often has to tell her to calm down before she creates something. really unpleasant.

Pepa’s eldest daughter, Dolores, has superhuman hearing. Her gift allowed her to be the first to find out any gossip in society, as she could hear almost anything, but Dolores’ magical abilities also proved to be a burden as she struggled to keep secrets. Due to the fact that she was constantly focused on everyone else, it was difficult for Dolores to look inside herself, which prevented her from ever looking for what she might need. She confessed this in Encanto and accepted that her cousin Isabella was marrying the man she loved instead of pursuing him herself.

Pepa’s second child, Camilo, received a magical gift to transform into different people. His transformations were instantaneous, he even changed clothes to fit a new image, and he regularly deceived his family with this trick. Camilo’s gift may not be as useful to the community as some others, but he definitely took advantage of his entertainment opportunities as one of the most comedic characters in Encanto. Camilo liked to play for other people, relying on quick wit and a sense of humor to cheer up others. Of course, constantly pretending to be someone else could make it difficult for Camilo to develop a strong sense of who he was. Unfortunately, Camilo was one of the least developed members of the Madrigal family, so little is known about him other than his penchant for practical jokes.

The youngest Madrigal, Antonio, went through a candle-lighting ceremony at the beginning of the Encanto. He was very nervous about doing something so important and public alone, even begging his older cousin Mirabelle to walk by his side. However, he needn’t have worried, because the ceremony blessed him with the ability to talk to animals. Being the youngest, Antonio often felt separated from the rest of the family, whose company was only Mirabelle in the nursery.

Diddy’s assistant begged Diddy to take him away from the “hateful...