Home Tech Emotional Video With A Mother Meeting With Her Child Who Lost Her... 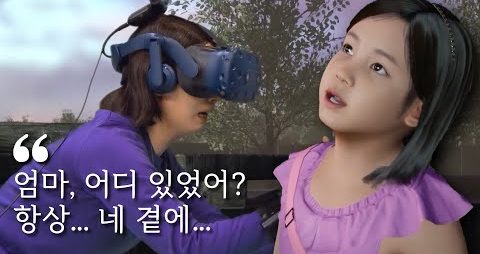 South Korean mother Jang Ji-sung, who lost her 7-year-old daughter as a result of a cancer without treatment, met her daughter again after a huge production. The painful mother, who saw her daughter again with the opportunities offered by virtual reality, had emotional moments.

It is a very difficult situation to lose the people we love and unfortunately, it is not a situation that we do not miss those people who come out of our lives timely. Although it is almost impossible to see them again, a mother met her daughter, who had lost her life, in the virtual reality world again, if not in reality.

Jang Ji-sung, who lost his 7-year-old daughter as a result of a cancer without treatment in 2016, met his daughter in the world of virtual reality after three years. The broadcasting company Munhwa Broadcasting Corporation, which released a clip called ‘I Met You’ on YouTube on YouTube, presented the meeting images of the mother and daughter to the world.

In the set up, the mother was given a VR glasses and a pair of gloves thought to give tactile feedback. In the images taken against a green background, it can be seen that the mother is talking with her daughter, holding hands and loving her daughter.

Mother’s meeting of the girl who lost her life in virtual reality
As can be seen in the video, the mother talks to her daughter, not keeping her tears. Even though the subtitles and speeches are in Korean, the meeting that will go down in history begins with the mother asking where her daughter was originally, then the girl appeared. According to the information we receive from our English sources, a certain section of the conversation is as follows:

Mom: Where are you…?

Daughter: Mom! My mom? Mom, where have you been?

Girl: Mom, did you think of me?

Girl: Mom, I was very special to you.

Mom: I missed you too. My Nayeon … Are you okay? Mommy always wanted to see you. You’re fine now, Nayeon, right? My beautiful daughter … Mom missed hugging you very much. Your mother missed you so much.

According to the information we got from the sources, the production team spent 8 months for this project. Transferring a park visited by the painful mother and daughter to the virtual world in real life, the team made use of motion capture technology to make a child actress virtual Nayeon.

Even if the result is not extremely perfect, even the possibility of seeing the people who have lost their lives is enough for us to see that the future offers many different possibilities. Of course, this video also raises the question of whether we can see the people we lost more realistically as technology evolved.

So, what are your thoughts on the subject? Do you think we will be able to see the people we lost in the future through virtual reality? Will technology improve this much? You can share your ideas with us in the comments section.