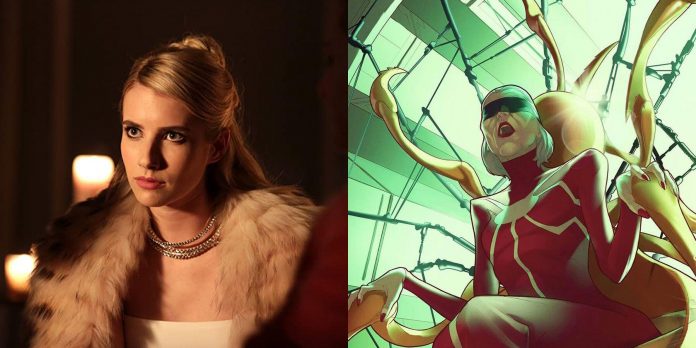 Sony’s Spider-Man universe is getting bigger, and Emma Roberts is becoming the latest addition to the cast of “Madame Web,” an upcoming movie based on the popular comic book character of the same name.

Roberts, known for her work in several films and TV shows such as “American Horror Story,” joins a star-studded cast that includes Dakota Johnson as Madame Cobweb and Sydney Sweeney from “Euphoria” in an unknown role. The rest of the Spider-Man spin-off features Celeste O’Connor, Isabella Merced and Tahar Rahim, although, like Sweeney, the names of their characters have not yet been disclosed.

According to Deadline, details about Robert’s role and the plot of the film remain a secret. However, earlier this year Sony announced that “Madame Web” will serve as the origin story of “the clairvoyant Madame Web, whose psychic abilities allow her to see the world of spiders.” In the comics, the character is depicted as an elderly woman named Charlotte Webb, suffering from a condition that disrupts the connection between neurons and muscles. Despite the fact that she cannot see or move without mechanisms that aid her movements (which resemble a spider web), she helps Spider-Man using her telepathic, clairvoyant and precognitive mutant abilities.

Sony has reportedly not commented on the news that Roberts has joined the cast of “Madame Web.” S.J. Clarkson, known for her work on “Jessica Jones” and “The Defenders,” will direct the script written by Matt Sazama and Burke Sharpless. Both screenwriters previously worked on Jared Leto’s infamous vampire thriller Morbius, which blew up critics and box office receipts.

Madame Web is one of Sony’s many Marvel—related projects currently in development. Another Spider-Man spin-off in development is Kraven the Hunter, in which Aaron Taylor—Johnson plays the main character, and Ariana Debose plays Calypso. The impressive cast of the upcoming film also includes Oscar winner Russell Crowe and “Breaking Time” star Levi Miller. In addition, musician Bud Bunny recently received the role of El Muerto in the third film about the Spider-Man Universe, thus becoming the first ever Latin American superhero in the Marvel project.

Unable to connect directly to the MCU, Sony continues to develop Spider-Man films without the character appearing. Although the last example, Morbius, was not too liked by the audience and critics, Sony is still confident in projects such as Madame Web. Although the participation of such talented actresses as Roberts, Johnson and Sweeney in the film is a step in the right direction, a smart script and direction are equally important. If done right, Madame Web can become a fun product with complex characters, just like the source material.