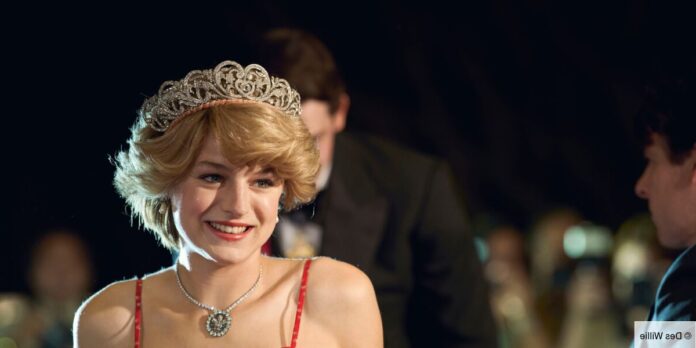 The Crown Season 4 has been running for a month and details on the latest episodes of the Netflix original series are still emerging.

Getting the role of Diana marked an exciting and terrifying moment for Emma Corrin. An actress with a few credits to her name, playing the People’s Princess in The Crown is her lead role.

Initially, Corrin felt immense pressure. She explained in a recent interview that she had to block out her own doubts and other people’s expectations and just focus on the role.

In preparation for the role, the actress read biographies about Diana and worked with a voice coach and movement coach. All the training paid off because Corrin received positive reviews for her performance on The Crown.

At one point during season 4 of The Crown, Diana gives Prince Charles (Josh O’Connor) a rather unusual anniversary gift. She gives him a VHS tape of her performing “All I Ask of You” from the Phantom of the Opera on the actual set.

Corrin filmed the scene and ballet number “Uptown Girl” in 48 hours on Thursdays and Fridays.

“It was very overwhelming. I had a huge panic attack in the middle of filming. Filming any kind of performance sequence means you have to do it a thousand times. And there were also a lot of people around. ”

Emma Corrin’s time as Diana is over. After playing her in the 1980s and early 1990s, a new actor will take over as an older version of Diana as per the show’s lore.

Elizabeth Debicki is poised to play Diana in the final years of her life, which will take place in the fifth and sixth seasons of The Crown.

Justin Bieber: a famous American singer is completely fan of him