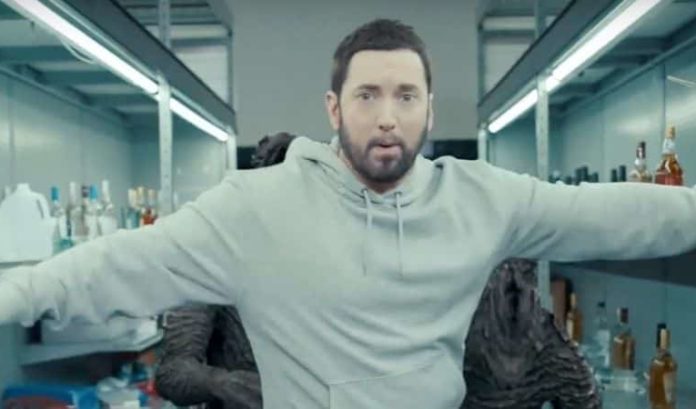 Mike Tyson invited Eminem in his Hotboxin ‘With Mike Tyson podcast . Besides, the rapper did not hide his joy!

Indeed, he was very happy to be able to chat with one of his heroes. This March 20, Mike Tyson received the legend of rap during his podcast.

Marshall Bruce Mathers, better known by the pseudonym Eminem, was delighted with the invitation. And he made it known!

During the show, the two men discussed a lot. Besides, the genius of rap could not hide his enthusiasm!

Indeed, he even kindly asked Mike Tyson to stop him if he got too “weird”. Eminem was indeed very happy to meet his idol.

Me and @iamdenaun rolled through @hotboxinpodcast and I’m so not worthy! The great @miketyson and @edsbritton – drops tonight at 6pm PT at YouTube.com/miketyson

EMINEM: “I FEEL LIKE A CHILD”
We never imagine how we could react if we came to meet our idol! Eminem knows it now.

Indeed, the rapper was lucky to be invited by Mike Tyson. The latter received it for his podcast. Hotboxin ‘With Mike Tyson.

Slim Shady is then overjoyed! He still tries to contain himself.

Besides, he even asks Mike Tyson to stop him if he becomes weird. “I feel like a child now a boy,” said the rapper.

“You are like a God to me!” You have accomplished so much in your life. ” Continuous Eminem. Before finishing : “It’s so crazy to be the heavyweight world champion at 20”.

An exceptional meeting for the two men. Besides, each of them has forever marked the world with their talent.

See Also
Eminem drops the surprise album "Music to Be Murdered By" and shock the fans!