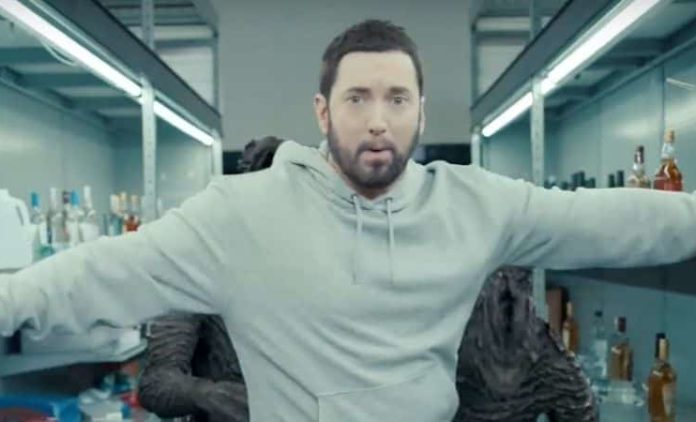 Rappers Eminem and Dr Dre reunited with Mike Tyson in the incredible clip “Godzilla”! We tell you more. Eminem, Dr. Dre and Mike Tyson together in the “Godzilla” clip!

Since the release of his album Music to be Murdered By , Eminem has not made many appearances. Indeed, apart from one or two interviews, he only released one clip: that of Darkness . However, we will not forget his very remarkable performance at the Oscars.

Indeed the latter had caused a lot of ink to flow after his performance of Lose Yourself. It is only 2 months after the release of his 11th album that the rapper finally decides to release a new clip.

Besides, Eminem has chosen to clip Godzilla , which is none other than the most listened track of the album. A crazy clip, which takes us back to the world of Slim Shady . And we also see Dr. Dre and Mike Tyson!

EMINEM, DR. DRE AND MIKE TYSON TOGETHER
The latest Eminem clip is finally available! Besides, Cole Benett was in charge of the production . An incredible clip that takes us back to a time when Eminem loved to stage in his clips. All with a lot of humor!

In the clip, we follow Eminem on an alcoholic journey. Besides, a lot of special effects come to enhance the video. But what’s even nicer is the appearance of Dr. Dre and Mike Tyson. Again Eminem proves how much he weighs in the rap game!

Finally, the clip transports us from one shot to another. All more improbable than each other! Finally, the video ends on a very touching note. Indeed, the song ends on a refrain sung by Juice WRLD . A way for the rapper to pay tribute to a young talent, who left far too early. True happiness for the fans. We let you discover the clip!

JAMES CHARLES IS SURPRISED TO SEE HIS MATCH WITH DUA LIPA