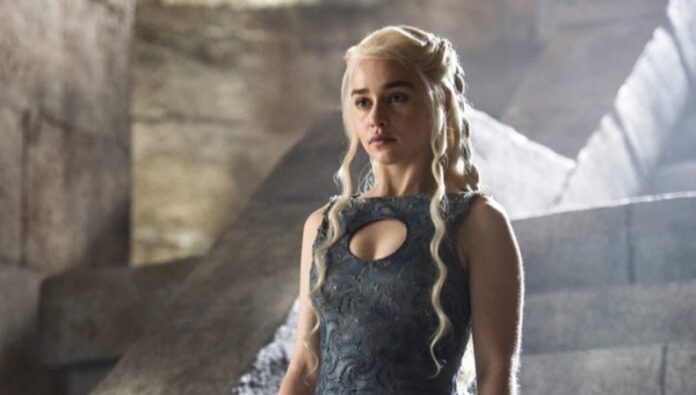 Emilia Clarke, aka Daenerys in Game of Thrones is no longer to present. Strong and iconic character , she is among the main protagonists who weave the fabric of the series inspired by the work of George RR Martin. Recognizable for miles with its platinum blonde mop , the Khaleesi therefore has taste in hairstyle. Witness the many wigs that the actress is wearing.

They also arrive at the arms of Emilia Clarke . It must therefore be a monster job to maintain , for the team. To the point where each of them must have its own identity! If we knew that Jon Snow ‘s capes were made of Ikea rugs, we now know that Emilia Clarke ‘ s wigs each have their nickname!

Kevin Alexander, the man who takes care of the manes of the actors in the show, gave the details of this hair interview .

EMILIA CLARKE: THE SECRETS OF HER WIGS REVEALED
What give a little more character to this hair more crowded than blond. For example, one of these wigs is called “Candice” , in tribute to another designer on the sets of Game of Thrones.

And it’s not the only one with its own name. Among these, we find Dany , Diva or a more evocative name: Blondie .

“We started with one wig,” said the hairdresser to Tim e . “Then, little by little during 7 years, we made others – they can easily weaken,” he admitted.

“These products are really sensitive to air,” he continues. “So if there is too much smoke on a fire scene, they turn gray . ”

“They are simply lost,” laments the man behind Emilia Clarke’s mane . “They turn gray as if it had rolled in the mud” .

It is therefore no small task to maintain the hair of the mother of dragons! Especially since the simple choice of the color of each wig was debated within the team .

Booba defends Jul on Twitter and pushes a rant!

Shakira announces participation in remix of “Tutu”, music by Camilo and...