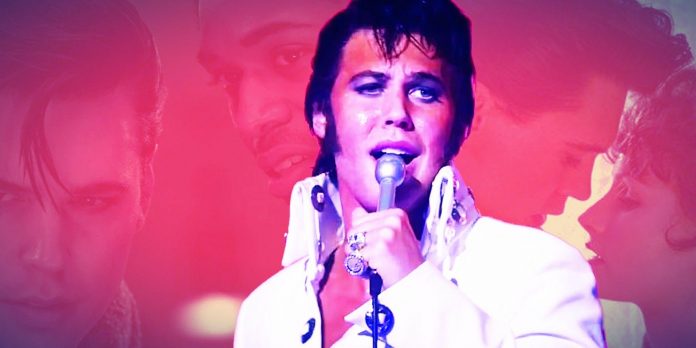 In The Gospel According To Elvis, the famous singer once said, “I figure all any kid needs is hope and the feeling he or she belongs. If I could do or say anything that would give some kid that feeling, I would believe I had contributed something to the world.” Elvis Presley certainly had a way with words. and Baz Luhrmann’s Elvis captures that aspect of The King’s personality while simultaneously incorporating quotes from the other formative people in his life.

Even with the operatic flair of Luhrmann’s musical biopic, the introspective and philosophical dialogue that cuts through the momentous moments of the singer’s rise to stardom helps give it context. Whether it’s his mother Gladys giving him advice, his manager Col. Tom Parker witnessing his success, or his own reflections on fame, the best quotes from Elvis reveal the man behind the myth.

“The Way You Sing Is God-Given, So There Can’t Be Nothin’ Wrong With It.”

Gladys Presley is a strong, spiritual woman who only wants the best for her son, but doesn’t always approve of the attention that he gets. Regardless of her opinion about the highly suggestive nature of his movements on stage, she’s his strongest supporter.

Having his mother in his corner is important to Elvis, and when she affirms the way he sings, even as it breeds dissent from the media, he feels like he can take on the world. With quotes like this, it’s easy to see why when she unexpectedly passes during his time in the military, he’s devastated, concerned that no one will understand him as she does.

“It Was At The Moment That Elvis The Man Was Sacrificed And Elvis The God Was Born. He Had No Idea What He Had Just Done.”

While this quote might seem hyperbolic, Luhrmann’s cinematography and set design are effective in communicating the pop culture phenomenon of Elvis in the zeitgeist of the ’50s. In one of the best portrayals of a real-life musician, it follows him from his days as a shy country boy into a superstar and, when he’s represented by Colonel Tom Parker, into a rock ‘n’ roll deity.

The Colonel’s words reflect that there is a difference between Elvis Presley the man and Elvis Presley the icon and that the former’s intellectual freedom and personal liberties had to be sacrificed at the altar of the latter’s success. The words are inspiring, but also contain an inherent sadness, especially when viewed through the perspective of Elvis’s life being a cautionary tale. Meeting the Colonel was both the best and the worst thing to happen to Elvis.

“There’s A Lot Of People Saying A Lot Of Things, But In The End, You Gotta Listen To Yourself.”

In Elvis, it’s very clear that all Elvis wants to do is sing and dance, and one day become a serious actor. He wants to do these things on his own terms, but realizes that censorship and the Colonel’s managerial style might prohibit this. That’s what makes his excitable performance of “Trouble” so riveting – it’s Elvis telling everyone off in favor of creative freedom.

When he yells to a crowd of young people that “in the end, you gotta listen to yourself,” it’s like a rallying cry. They respond not only to his gyrating hips and his rambunctious music but also to his call to arms against the oppressive powers trying to truncate self-expression.

“They Might Put Me In Jail For Walkin’ Across The Street, But You A Famous White Boy.”

One of the most powerful sections of Elvis focuses on his time spent on Beale Street in Memphis, Tennessee, listening to the Black musicians that inspire his music; Little Richard, Big Mama Thornton, Arthur Crudup, and B.B. King.  Elvis has no problem being the only white person in all-Black concert halls and bars, and can’t understand why segregation exists.

B.B. King tries to communicate to Elvis that the world operates differently for each of them. King emphasizes that Elvis will always make more money covering the same songs as Black musicians and that he has to be cognizant of its effect on the community.

“Now, I Don’t Know Nothing About Music. But I Could See In That Girl’s Eyes, He Was A Taste Of Forbidden Fruit. She Could Have Eaten Him Alive!”

A self-professed “snowman,” Col. Parker only knows about how to con people, not about the talent that goes into making music. When he sees Elvis perform for the first time, he understands that the Mississippi native will be a lucrative asset and potential moneymaking machine.

This quote is telling because it makes it clear that Col. Parker approves of Elvis being painted as a “delinquent” in popular music because quarreling with the media and local politicians will mean big sales of his records. There’s no such thing as bad press in Parker’s eyes (as Parker’s own personal controversy demonstrates), and while he publicly condemns Elvis’s methods and appears to sterilize his image, he secretly fans the flames of unrest behind the scenes.

Already a well-known musician around Mississippi by the time he meets Elvis, B.B. King already recorded with Sun Records and enjoyed a certain amount of celebrity, though he doesn’t yet play to white crowds. He warns Elvis that if he doesn’t remain vigilant about his business dealings, they’ll control his whole life.

Elvis defers all business dealings to Col. Parker, which is why he has no idea how much his manager is embezzling, or controlling his movie career. King comes across as a true friend to Elvis, trying to make him see the bigger picture before it’s too late. Had Elvis paid more attention to this quote, his life might have had a more auspicious outcome.

When Elvis serves overseas, he meets Priscilla, the daughter of an officer in the Air Force, and though she’s only fourteen, the two develop a strong bond. Over the years, they come to mean more to one another and get married when she’s 22.

This quote establishes Priscilla as a bit of a dreamer, like Elvis, and her indomitable spirit seems to give The King some comfort. Their relationship becomes volatile later in his career, especially when hard drugs are involved, but she remains steadfast in her belief that he can achieve anything he wants if he believes in it hard enough.

There are various points throughout Elvis when the powers that be try to make Elvis tone down his individualism, and each time he has to fight against it. The way he moves while he sings is considered salacious, even revolutionary, and they’re afraid of what it will excite in throngs of young people, and what it will ignite in their conservative parents.

As Elvis declares vehemently if he can’t move, he can’t sing, and time after time he finds ways to sidestep the suffocating expectations of producers, directors, and even Colonel Parker. It’s one of the best Elvis quotes to perfectly capture his personality in one accessible soundbite.

“We Are The Same, You And I! We Are Two Odd, Lonely Children, Reaching For Eternity.”

Colonel Parker may not have seen something of himself in Elvis, but he understood how to use empathy to get what he wanted. His manipulation tactics knew no bounds, as evidenced by the way he constantly tried to make Elvis believe that they were a team, and that he had his best interests at heart.

Parker lets Elvis think he too is a misunderstood misfit trying to navigate life as best he can, and this seems to lull Elvis into a false sense of security. Parker is able to control Elvis so well during the Vegas era of his career because he has sunk his claws in by degrees, and the hold has been so incremental that The King doesn’t realize it until it’s too late. By that time, if he ripped Parker off of him, he’d bleed out.

“I’m Gonna Be Forty Soon, And Nobody’s Gonna Remember Me.”

It might seem preposterous that Elvis includes a scene of The King doubting his own legacy when he’s a worldwide phenomenon, but in the context of the ’60s zeitgeist, it makes sense. Bands like The Beatles were already making Elvis seem old-fashioned and corny, instead of the trailblazing sensation he was once.

At the time of this quote, The King indicates to Priscilla that he’s tired of his repertoire, the routine of his life, and his responsibilities, wanting nothing more than to abdicate his throne. It shows how introspective and sensitive he could be, while simultaneously revealing the pressures of his success and maintaining the image the world had of him.