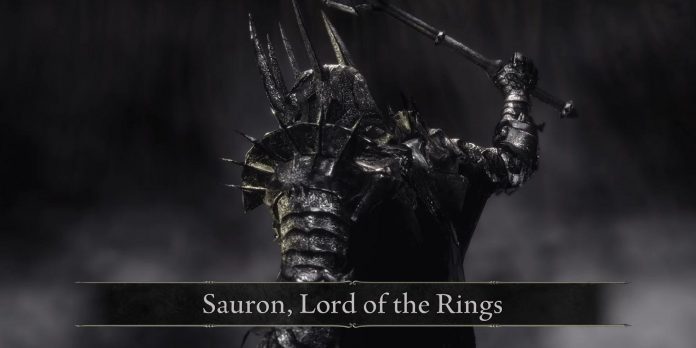 One of the most iconic villains in fiction and the antagonist of The Lord of the Rings comes to the Elden Ring thanks to the modder MaxTheMiracle. Many consider Elden Ring to be a great game in itself, but modders have been changing the name since it was first released. Some other crossovers have already been added to the Elden Ring with mods, including a mod that allows Tarnished Ones to wear the armor of the Master Chief, and another that gives the player the power of the fire mage from Avatar: The Last Airbender.

The MaxTheMiracle mod adds the iconic set of Sauron’s armor from the Lord of the Rings movies, as well as his mace. There are plans to give Sauron his own set of techniques, but at the moment the footage shown contains a set of substitute attacks. However, the current set of moves embodies the idea of the player taking on the role of a powerful Dark Lord as Sauron teleports through the boss arenas, fighting Radagon of the Golden Order as if he were as simple as Godric’s Soldier.

In addition to demonstrating Sauron’s power when he can be played for, the YouTube channel downloading the MaxTheMiracle mod, Garden of Eyes, also showed what a boss battle against the Dark Lord in the Elden Ring would look like. It seems that both the game character and the enemy, Sauron is equally strong. In the form of Sauron’s boss, he borrows techniques from Radagon, but uses his signature mace instead of a hammer and has red effects around his attacks.

Sauron can be downloaded from the MaxTheMircale website on Patreon, and he will become part of the Elden Ring modification created by Garden of Eyes. The release of the Sauron mod for Elden Ring was supposed to appear around the same time as the TV show Rings of Power, the first two episodes of which have just aired on Amazon Prime Video. Currently, the big villain of Middle-earth has not yet appeared in the series, although he has been mentioned several times.

In addition to adding crossover characters, Elden Ring mods can also add a lot of new features to the game. There are some that seek to significantly complicate the game, such as one change that makes each enemy a Malenia, while other Elden Ring mods seek to simplify the game by making it easier to level up and get items.