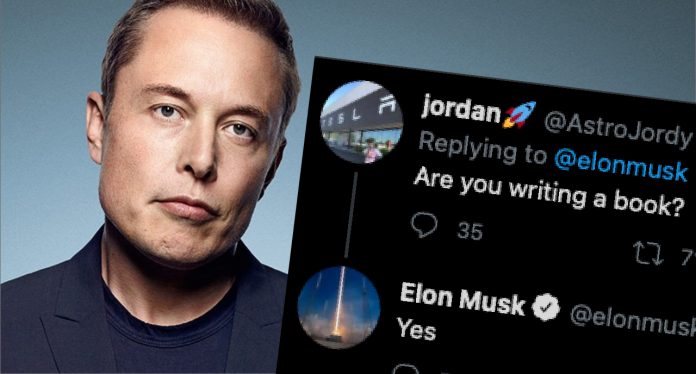 Elon Musk announced on Saturday that he is writing a book about his two biggest companies, Tesla, SpaceX and the lessons he learned in his career. “Time to tell the story of Tesla and SpaceX,” Musk tweeted, saying. The billionaire, who later posted his second Tweet on the subject, dropped the note “From Earth and Mars”. Musk, who posted a third Tweet in addition to two Tweets, said “lessons learned” in his third post.

Elon Musk, who made more than 46 million followers curious with his Twitter posts, gave the clue of the Tweets he sent with the answer “Yes” in response to a follower asking if he wrote a book under the Tweets he posted about the subject.

Musk last talked about writing a book in 2019, and when he said his early career story could “be worth a book someday”, he announced that it would take him away from his work at SpaceX, Tesla, and Neuralink.

It is unclear how Musk, the founder of The Boring Company, SpaceX and Tesla, and one of the founders of both OpenAI and Neuralink, will spare time to write the book, whose allegations that he wrote the book as a result of his new posts.

However, as it is known, Elon, speaking in the fourth quarter earnings call made by Tesla on January 27, stated that he planned to remain as Tesla CEO for the next few years, but it would be nice to have “a little more free time”. These explanations can be considered as an effort to create free time for the book that Elon Musk will write.

In addition, the South African entrepreneur, now the richest man in the world, is known to work 85 to 100 hours a week and sleep six hours a night.

Finally, let’s point out that the biography book that Musk is supposed to write will not be the first book about the billionaire’s business journey. So much so that in 2015, journalist Ashlee Vance published a book titled “Elon Musk: Tesla, SpaceX and a Fantastic Future Search”.