Home Entertainment Elon Musk speaks harshly about the power rings of the “Lord of... 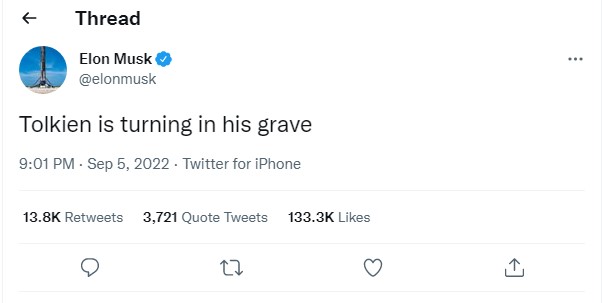 Famous billionaire Elon Musk harshly criticized the most popular TV series of the last period “The Lord of the Rings: Rings of Power” in his post on his Twitter account.

The famous billionaire Elon Musk, who often finds himself on the agenda with controversial issues and does not easily fall off the agenda, did not hesitate to criticize the most popular series on the agenda, The Lord of the Rings: Rings of Power.

Musk, the owner of Tesla and SpaceX, shared his comments on The Lord of the Rings: Rings of Power series in a post on his Twitter account, and there were those who joined his criticism and those who disagreed. Let’s see what Elon Musk said.

“Tolkien turned over in his grave”

Tolkien is turning in his grave

Elon Musk criticizes “Tolkien turned over in his coffin” for the “Rings of Power” series in his post at about 9 o’clock. Later in his tweet, Musk complained that the male characters in the series are “weak” and said:

“Every male character that has ever appeared is either a coward, or a scumbag, or both. Only Galadriel is brave, smart and kind.

The series “Rings of Power” was really problematic for Amazon, because in recent days Amazon banned the review of the series for 3 days because of the “review bombing”. Apparently, Elon Musk, the “sworn enemy” of Jeff Bezos, the former owner of Amazon, is also among those who do not like the series.

What do you think about the series “The Lord of the Rings: Rings of Power” and the criticism of Elon Musk? Please don’t forget to share your thoughts with us in the comments.

Stranger Things: 4th season of the series gets dark photos