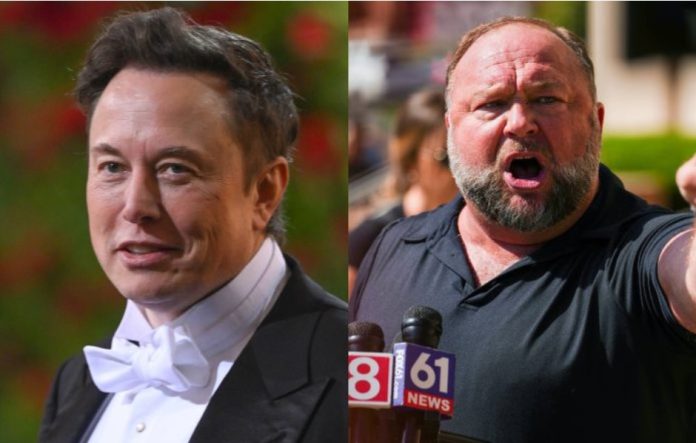 This is happening despite the reinstatement of Donald Trump and Kanye West on the social media platform.

Elon Musk has ruled out any chance of the far-right and conspiracy theorist Alex Jones returning to Twitter.

The social media platform permanently blocked the accounts of Jones and his Infowars website in September 2018 for violating the platform’s policy on abusive behavior.

He gained notoriety for falsely claiming for years that the 2012 Sandy Hook Elementary School shooting never happened, and was recently ordered to pay nearly $1 billion in damages.

When asked if Jones should be brought back, Musk initially said “no” before clarifying that he had lost a child—due to sudden infant death syndrome in 2002-and said Jones had used the children’s deaths to advance his own plans.

He added: “My firstborn died in my arms. I could feel his last heartbeat. I have no mercy for those who use the death of children for profit, politics or fame.”

The move came despite Musk reinstating Donald Trump on Twitter after an online poll and Kanye West after his account was previously blocked following a series of anti-Semitic posts.

Trump’s reinstatement, in particular, provoked a negative reaction from Jack White, who sharply criticized Musk for allowing such a step, calling it “absolutely disgusting” and “an asshole move.”

The former US president was removed from the podium after riots in the Capitol on January 6, 2021.

Musk was widely criticized for his questionable actions on Twitter, which he officially adopted in October. Among the dozens of stars who pounced on him are Katie Burke, Stephen Fry, Julian Casablancas of The Strokes, comedy group SpitLip and Trent Reznor.

There are rumors that Twitter itself will soon collapse; Over the past few weeks, Musk has laid off thousands of employees, and advertisers have begun to leave the platform en masse. It is reported that a few days after Musk came to power, the level of hatred on Twitter sharply increased — for example, the use of the N-word increased by almost 500% within 12 hours.

Last week, Musk also allegedly told the remaining Twitter employees that they should “work long hours with high intensity” or leave the company, which was soon followed by rumors about the collapse of the site.