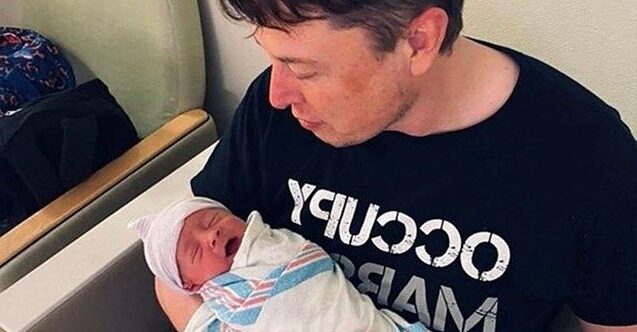 Elon Musk and the Grimes couple named their babies born at the beginning of the week ‘X Æ A-12’. Musk made the point to the rumors by explaining how to pronounce this name. However, Grimes said that the baby’s name had a different pronunciation than that of Musk.

What made the name of the newborn baby even more difficult was how to pronounce it. Grimes, who shared the pronunciation of his babies ‘name from his Instagram account this week, claimed that the name should be spoken phonetically as’ yes! Participating in the podcast by Joe Rogan, Musk put an end to the discussion of pronunciation.

The name was Grimes’ idea:
In the program, when Rogan asked how to pronounce the boy’s name, Musk stressed that Grimes is the partner of the ‘X Æ’ part, saying that he is ‘great about names’. Stating that this part is said as’ ex mate ‘(the pronunciation of’ ash ‘meaning X and’ ash ‘), Musk said that’ A-12 ‘was inspired by CIA’s spy plane’ Archangel-12 (Archangel). . Musk added that this plane is the ‘coolest airplane ever.’

A Twitter user on Monday; Musk and Grimes correctly predicted the pronunciation of the baby of the couple. When the user named ‘Viv’ wrote the name ‘X Ash Archangel’, Musk liked this tweet. X Æ A-12 Musk was the sixth child of Elon Musk, and was born as the first child of Grimes. The CEO had been divorced 3 times before.

See Also
Elon Musk: The billionaire humiliated during the presentation of his Tesla pickup

On the other hand, Musk said that in response to criticism that their name is like a robot name, human languages ​​could go out of fashion, and this could happen in 5 to 10 years at best. Claiming that people are already partly symbiotic with artificial intelligence, Musk argued for this reason that people need to be ‘updated’. You can watch the episode of Elon Musk announced in Joe Rogan’s podcast after 0:34 minutes of the video below.