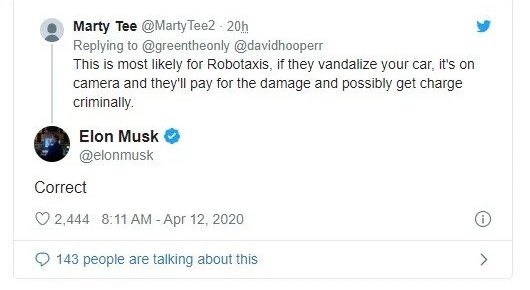 Elon Musk, founder of Tesla and SpaceX, confirmed a Twitter user’s cabin camera theory in Model 3. With this statement, we learned that the camera showing the interior of the vehicle was added for the autonomous taxi project.

Tesla model vehicles come with a camera hardware that shows the interior of the vehicle from the very beginning. Until this time, Elon Musk did not explain why the cars came with such a camera angle, and clarified the issue. Answering a question asked by a user on Twitter, Musk confirmed that the in-car camera placed on Tesla model vehicles is for realizing autonomous taxi plans.

Elon Musk confirmed that the Twitter user said, “This camera is probably for robotic taxis, if the person who gets into the taxi destroys the car, he will have to pay for the damage and will probably be the culprit.” With this explanation, an important task of the in-car camera, which has long been considered to be incomplete, has been confirmed.

Tesla, known for his semi-autonomous vehicles, wants to make autonomous taxis that can go on his own in the future. Since there are no drivers in autonomous taxis, there is a possibility that passengers who are left alone can damage the interior cabin of the vehicles. Tesla overcomes this problem with a wide-angle camera built into the vehicle.

There are other plans for the camera
According to the news of Electrek, Tesla is working on some patents to use this camera for other purposes. Among the company’s new plans for the cabin camera are; It is to recognize the people who get in the car and to make the personal settings such as seat position and climate adjustment that they used while in the car automatically.

Studies for autonomous vehicles, which we expect to see more in the near future, continue at a great pace. Tesla, one of the leading companies in this regard, has been trying to prepare the ground for a world equipped with autonomous vehicles for a while.

Microsoft Confirms That Windows 10X Will Be Discontinued

Affordable Flagship From Xiaomi Is Coming!