Elon Musk, who came to the fore with his statements about Covid-19 this week, answered an investment question about Bitcoin from his social media account. Maisie Williams, who portrayed the character Arya in Game of Thrones, shared a tweet at night and asked people the question “Should I go long on Bitcoin”.

More than 600,000 votes were cast for this question posed by Maisie Williams in a poll. The voting difference between those who wanted Williams to take a long position on Bitcoin and those who did not were quite close.

While 50.4 percent of the survey participants answered “yes”, 49.6 percent answered “no”. Meanwhile, Elon Musk was among those who answered Williams, although it is not known whether he participated in the survey or not. SpaceX and Tesla CEO Musk responded with a reference to Netflix’s popular series The Witcher. Musk answered the famous actor’s question about BTC with a small change to The Witcher’s soundtrack: 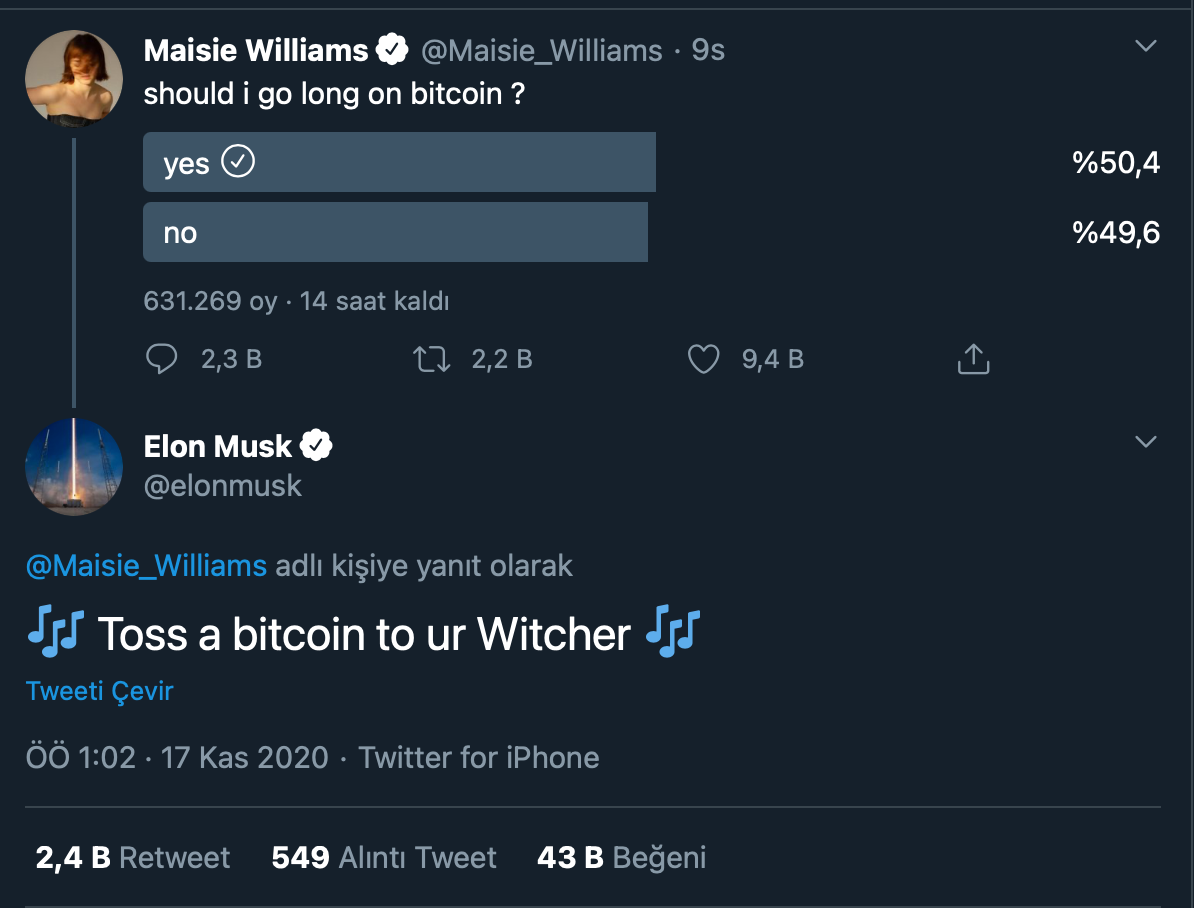 Is it “bull” time for Bitcoin?

This survey, which Maisie Williams opened on Twitter, received a positive response among cryptocurrency followers. BTC / USD, which tested $ 17,000 at night and currently traded at $ 16,600, continues to make the bulls smile.

“So we’re at this stage of the bull cycle,” an engineer named Ryan LeFevre on social media quoted Maisie Williams’ survey. made a comment. In 2017, when the Bitcoin price tested $ 20,000, a similar stage was entered, and it was witnessed that many famous names began to ask questions about BTC and try to get information.

Oh boy, we’re back at this phase of the bull cycle. Full send. https://t.co/Uhw5uEopkz

Hayabusa2 will bring the collected samples to the world

What is the Halo that saved the F1 pilot?

What the latest situation in gold prices? 18 September

PS5 does not have 1440p resolution TVs take priority

Released for everyone! The Weeknd releases one more song: “Blinding Lights”

The 72nd Emmy Awards winners! Here are the winners

Diane: her companion is a great French sportsman!