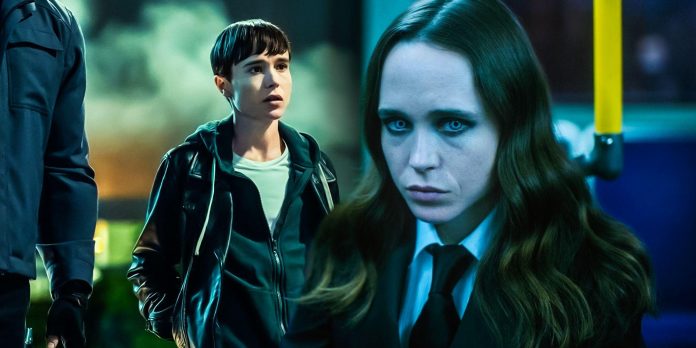 Elliot Page will return in the third season of Umbrella Academy, but to what extent will they play Vanya Hargreaves? The 3rd season of Umbrella Academy will start where the 2nd season left off, with a huge cliffhanger. Having failed to save the world in the first season finale, the Hargreaves siblings found themselves stranded in 1960s Dallas during the second season of Umbrella Academy. to be rejected. Unfortunately, after telling Reginald Hargreaves (Colm Fiore) about their future, the Hargreaves siblings seem to have changed their fates. When they finally managed to return to 2019, they found that the Sparrow Academy had replaced them on the timeline, and were no less shocked to find their brother Ben (Justin H. Min), who died when they were all teenagers, alive and well. .

In December 2020, in an emotional message on the social network (via Instagram), Elliot Page announced that they were transgender and changed their pronouns to he/they. Much later, in a separate Twitter post, Page uploaded a photo of #7 sitting next to his sister Allison (Emmy Raver-Lampman) in a diner, with the caption “Meet Victor Hargreaves.” While there have been rumors about how Elliot’s announcement will affect the series’ storyline, Victor’s image and name provide the series with exciting and impressive opportunities for Victor’s character development.

Elliot Page portrayed Vanya Hargives, also known as number 7, in the first and second seasons of Umbrella Academy. His image of Vanya was detailed and layered, and the character development throughout the series was astronomical. Vanya is initially closed and unsure of himself, which is the result of years of emotional neglect, lies and drugs designed to restrain their powers. However, by the end of season 2, Vanya has learned to control his abilities, accept himself as they are, fall in love and reconnect with his brothers and sisters. It’s an emotional journey that will probably continue throughout the 3rd season of Umbrella Academy. However, the official trailer for the 3rd season of Umbrella Academy seems to show a few glimpses of Vanya, so it seems that Paige will still portray Victor before the transition, even if he’s only for a few scenes.

Will Victor’s transformation be shown in the third season?

A lot of theories and assumptions about what the story of Victor Hargreaves could be in the third season have spread since Page posted a photo of Victor and Allison on Twitter. Two possibilities were most likely: either Victor is number 7, which viewers already know and he made the transition, or Victor Hargreaves is number 7 from an alternate timeline. While the latter could certainly provide an interesting storyline and still culminated in the transition at number 7 in the original Umbrella Academy, it was recently confirmed that Victor’s transition would be part of his character’s journey throughout the events of season 3 (via Esquire). .

Victor’s transition in the third season will be an interesting continuation of his path of self-discovery, which has already been described in previous seasons. In the first season, Victor was in a romantic relationship with a man, Leonard Peabody (John Magaro), and in the second season, Victor fell in love with a woman named Sissy (Marin Ireland). Victor’s understanding of his gender identity and the path to transition is a natural continuation of Victor’s path, aimed at confronting the past and understanding who they are on their own terms without the controlling presence of his father.

The third season of Umbrella Academy will begin after the Hargreaves siblings managed to avert the apocalypse, Handler (Kate Walsh) was officially defeated, and they finally returned home in 2019, only to find that they had been replaced. The last few minutes of season 2 have become the perfect cliffhanger, which surely keeps viewers on their toes and curious enough to tune in to season 3. the transition becomes unlikely. If there really is no time between the 2nd and 3rd seasons, Victor cannot have a logical transition between seasons. This leaves two possibilities. Either there is a time jump in the season and Victor’s transition occurs within that time jump, or Victor’s transition becomes a natural part of his character’s arc during the season. It seems that the authors of the Umbrella Academy have chosen the latter.

The timeline of the third season’s introduction means that Elliot Page will portray Victor before the transition in at least a few scenes.

The Lord Of The Rings Series Confirms Its Definitive Name In...