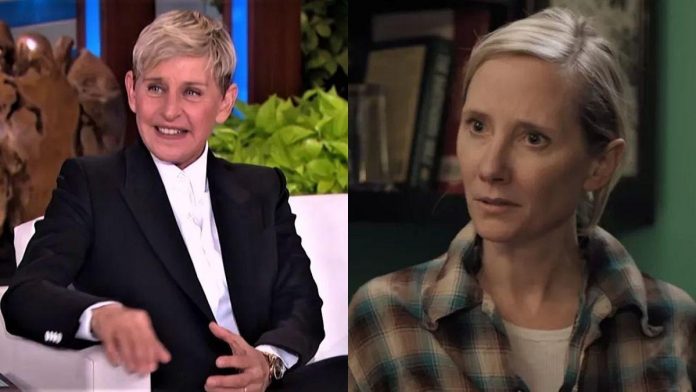 It’s been more than 20 years since Anne Heche and Ellen DeGeneres were in a relationship. And although both have had successful careers of their own since then, for many they will probably always be connected. For this reason, many were probably waiting to see if Ellen would make any public comments about the wild car accident that Heche was recently involved in. Now she’s done it, and although Ellen hasn’t said much, she’s made it clear that she hopes Hech is okay.

Ellen was approached by a paparazzi photographer who asked her if she had spoken to Anne Heche after the accident, which seems unlikely since reports that Heche was in a coma after the accident and still has not regained consciousness. In the clip posted by ET, Ellen is clearly not interested in talking to a man, but says she does not maintain regular contact with Heche. Ellen then joined the chorus of friends who certainly hope that Heche is all right. According to her…

I’m not. We don’t communicate with each other, so I don’t know. […] I don’t want anyone to get hurt.

Although Ann Heche’s long-term injuries are unclear, the most recent report is that she is unfortunately very injured. As mentioned earlier, she reportedly fell into a coma shortly after the accident and still hasn’t woken up. Her representatives also said that the lung injury requires mechanical intervention to help her breathe. She also suffers from severe burns that will require multiple surgeries.

Last Friday, Heche drove her blue Mini Cooper into the wall of an apartment building, after which, according to witnesses who tried to intervene, she drove off at high speed. Soon after, she crashed into an apartment building again. This second accident caused a fire that destroyed the car as well as the house it crashed into. The homeowner’s friends launched a GoFundMe that raised over $130,000 to replace her lost home and possessions.

After initial reports that Ann Heche was stable after the accident, later reports from her people described her condition as critical. The Los Angeles Police Department launched an investigation into the accident after it occurred on Friday, but has not yet released any information on this investigation.

Ann Heche was the one Ellen DeGeneres was dating when she publicly stated that she was a lesbian. Ellen, the main star of the sitcom in the late 90s, was the most famous actress of that time, which attracted media attention. Heche has since commented that Hollywood blacklisted her because of the relationship. This includes a story Heche told about needing Harrison Ford’s help to keep her role in their romantic comedy “Six Days, Seven Nights.”

Why the new regular series Resident Is the “Perfect Casting” for...