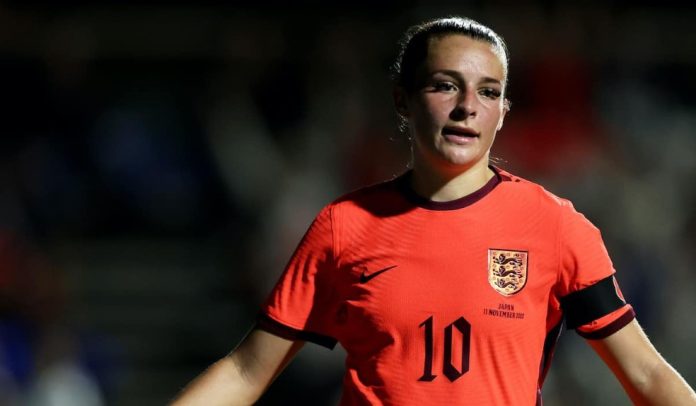 Several Manchester United players played for their countries this weekend, and Ella Toone, who has been in the spotlight lately, further attracted headlines by scoring a goal against Japan.

England travelled to Spain for their first international friendly against Japan and six United stars were named in the squad, three of whom started.

Mary Earps scored again when the Lionesses won 4-0. She reunited with teammates Thune and Russo, and it was the former who scored England’s third goal of the night.

The 23-year-old, who recently won the WSL Player of the Season award at the Northwest Football Awards, scored it in the far corner with the help of former Red, Ebony Salmon.

Russo gave the Japanese problems throughout the game and hit the post at the beginning of the first half.

Parris and Zelem played a few minutes in the second half, and Maya Le Tissier, who received her first call-up to the England national team, was an unused substitute.

Meanwhile, Adriana Leon helped Canada to victory over Brazil, scoring a stunning goal from the edge of the penalty area. She hit home from a corner that the South American side could not overcome.

Canada will play Brazil again on Tuesday, and Leon hopes to become an integral part of this team.

Hayley Ladd, Carrie Jones, Chloe Williams and Safia Middleton-Patel have been called up to the Wales national team, which will play Finland today.

Marta Thomas and Kirsty Hanson have been called up for Scotland, but it is predicted that Scotland and Panama will field under-23 players when they face each other today. They may have an opportunity on Monday when they fight Venezuela.

Meanwhile, Wilde Bo Risa and Maria Torisdottir are in the Norwegian national team, but were on the bench in the match against France.

Norway will play England on Tuesday, where eight reds may appear!