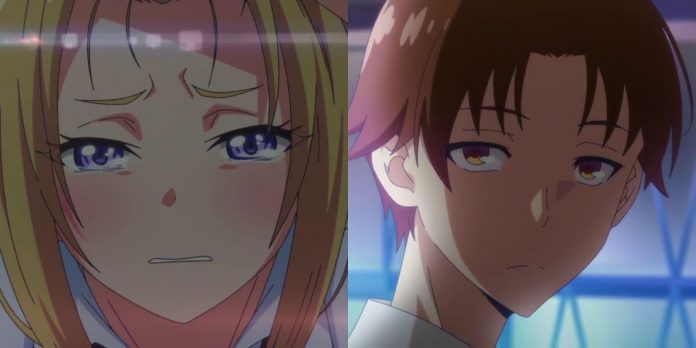 Below are the spoilers for episode 2 of the second season, “Elite Class”: “There are two basic human sins from which all the others stem: impatience and laziness,” which are currently being broadcast on Crunchyroll.

“Elite Class” is always full of impressive, awe-inspiring moments that are back now as the second season is underway. Episode 1 of the new season was a refreshing presentation of what the series offers. Starting with a nervous test in which all the 1st grade students participated, this episode revived the expectations of fans of an incredible confrontation that will strengthen the rivalry between all classes.

On the other hand, the second episode of the season focused on specific characters and their thought processes, such as Ayanakoji and Ryuen. The episode also showed Karuizawa Kei in a different light, revealing the secrets of the character, allowing viewers to witness sensational hidden events. As the second season of “Elite Class” progresses, it would be interesting to see how it connects Karuizawa to the current mind-boggling ordeal that Class 1-D has to go through.

Episode 2 began by focusing on Koenji, an obnoxious, stubborn Class I-D character. In the first season, Koenji revealed the undesirable sides of his personality; he is self-confident and does not know the desires of his classmates. Based on his actions in the first season, it would not be an exaggeration to call him a frivolous character obsessed with himself. But, surprisingly, in this episode ​​Koenji is portrayed as an intelligent man. Although his strategy was not revealed, he forced the Jupiter Team to perform at the beginning of the trial, setting the pace for the entire saga. Although the consequences of his actions may not be very good, they were impressive, and they earned the praise of Ayanakoji.

After Koenji’s debut in episode 2, the setting soon changes to one involving Horikita Suzune and Kiyotaka Ayanakoji in a discussion. Much of their discussion revolved around Karuizawa Kei. Ayanakoji wanted to get high-quality information about Karuizawa, suspecting her of being one of the VIPs, despite her refusal to cooperate with the Mars Team. At first, Horikita rejected Ayanakoji’s offer, stating that “there is no logic in her actions.” However, Ayanakoji sensibly explained to Horikita that sometimes there is more to a person than what he seems. Consequently, there is more to Karuizawa than she shows—a fairly common occurrence revolving around most of the characters in the “Elite Class”. Ayanakoji was able to notice small changes in Karuizawa’s behavior — enough facts to conclude that Karuizawa is a candidate for the role of VIP.

The insightful conversation between these two characters was soon interrupted by Ryuen, the leader of Class C, and his henchmen. Trying to persuade Horikita to join him, he offered her attractive offers, which she refused all the time. In the background, Ayanakoji objectively studied Ryuen, making several conclusions about the gangster character. According to Ayanakoji, Ryuen has the potential to pass the test because he is a few inches closer to understanding the intricacies of the academy. After a short meeting, Ayanakoji ran into Kushida, who behaved strangely and uncharacteristically towards Ayanakoji. In the first season, Ayanakoji saw the dark side of Kushida, which made him wary of the character. So, when she threw herself at him in episode 2, her actions raised questions bordering on what she was trying to achieve. Despite the fact that fans can infer romantic intentions from Kushida’s death, this may be another of her schemes.

The true nature of Karuizawa

The first episode of the second season of “Elite Class” ended with Karuizawa crying in her bathroom. Her unexpected actions have intrigued fans of Classroom of the Elite, teasing viewers over what is behind her actions and whether she will be revealed in the 2nd series. As expected, Karuizawa turned out to be a very interesting character, and this was clearly shown in the 3rd series. Firstly, in her younger years she was “a victim of terrible bullying.” This event prompted her to establish a comfortable relationship with Hirata, a representative of Class 1-D, in order to protect herself from further bullying.

However, after the bullying saga in episode 1 that forced her to remember the past, Karuizawa has now decided to use Hirata as a weapon to confront her new bullies. Unfortunately, Hirata refused to be used as such. In addition, he proposed to start a peaceful settlement of the conflict between Karuizawa and her hooligans. Karuizawa refused Hirata’s offer and decided to break off the relationship. Coincidentally, Ayanakoji witnessed this development, which confirmed his suspicions about the character. After breaking off her relationship with Hirata, Karuizawa seems to have found solace in Machida, a Class 1 student.

Quotes from the Obi-Wan Kenobi series with a deeper Meaning (which...