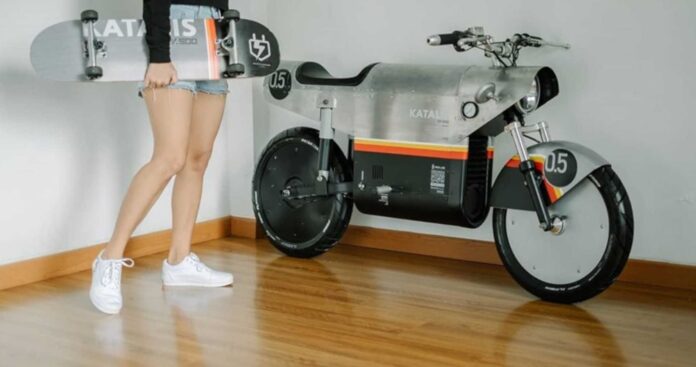 Indonesia-based Katalis company, which develops mobility-oriented projects, has developed an extremely stylish electric motorcycle inspired by the design of aircraft in the Second World War. The motorcycle named Katalis EV500 offers a driving range of 40 kilometers on a single charge.

Electrification gradually takes over not only the automotive industry, but also the motorcycle world. In recent years, we have seen many stylish electric motorcycle designs. EV500, developed by a company called Katalis in the capital of Indonesia, Jakarta, is distinguished from its competitors with its unique design.

Katalis EV500, whose body is made of 6061 aluminum alloy material with high corrosion resistance, is inspired by the design of Japanese fighter planes used in the Second World War. Julian Palapa, lead designer of Katalis, said the designs of electric motorcycles with metal bodies are quite rare.

The design of the Katalis EV500 is inspired by Japanese fighter planes used in World War II
Stating that the Katalis EV500 is equipped with many retro-style, yet highly functional instrument panels, from an analog voltmeter to a light switch, Palapa said that they consider three main elements when developing the electric motorcycle: feeling of freedom, happiness and green transportation.

Having a 500W electric motor, Katalis EV500 offers 40 kilometers driving range on a single charge.
As you can see, it’s not better than other electric motorcycles in terms of performance, but it’s absolutely unique in design. Standing out with its retro and cool appearance, Katalis EV500 will be exhibited for the first time at the International Motor Show, which is planned to be held in the capital of Indonesia, Jakarta. Whether the Katalis EV500 will enter the production line is not clear for now, but if the company has such a plan, it would be a good move to increase the range of 40 kilometers.