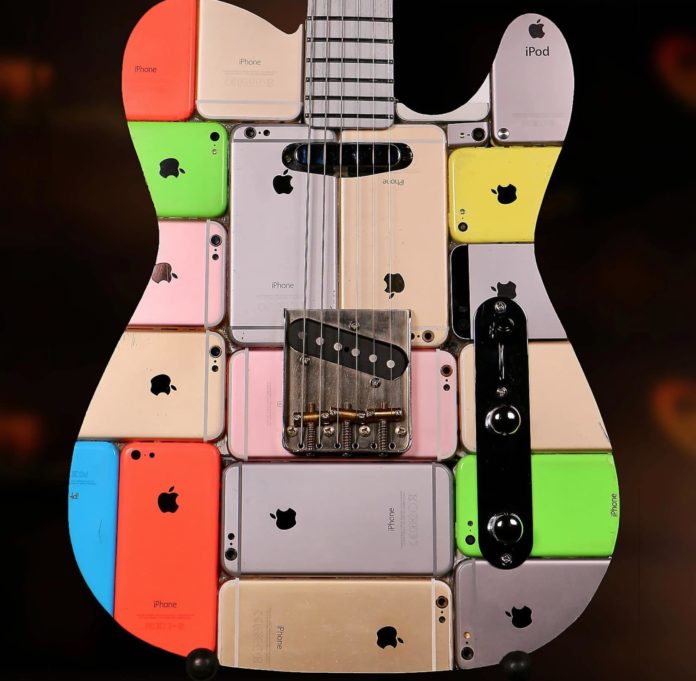 A lute, one of the most interesting guitars ever made. Instrument maker Artem Mayer brought together 106 iPhone and 1 iPod Touch to create a colorful electric guitar.

Artem Mayer, who lives in Moscow, pushed the limits of his imagination by creating an electric guitar from 106 iPhone and an iPod Touch. Mayer is actually a professional lutiye producing instruments under the Copper Guitars brand.

Mayer, an unusual design guitar in recent months Reddit’de, “One day I came up with an idea. IPhones, how to make a real and cool guitar?” he shared. A bright guitar consisting of colorful iPhones resembling Fender Telecaster.

This electric guitar, a product of ambitious work, was put up for sale by the Moscow-based guitar shop Copper Guitars. This product, purchased from Fender Telecaster in 1999, expects buyers for around $ 6,000. It’s definitely one of the crazy ways to reuse old Apple devices.

Mayer’s electric guitar (also called iGuitar) weighs just over 8 kilos. The guitar has a mahogany handle with Jescar frets and special Fokin pickups. Mayer cut the body of the guitar into iPhones. The sides are open and the hardware components inside the phones are visible.

Copper Guitars initially sold the guitar for $ 1 million. However, the guitar could not find buyers and the price fell to $ 6,000. The cargo also belongs to the buyer.

Video of the electric guitar made from iPhone:

“For luck”: Salvatore Vassallo is in love again

Big sales of million dollars before the crisis in Zoom broke...