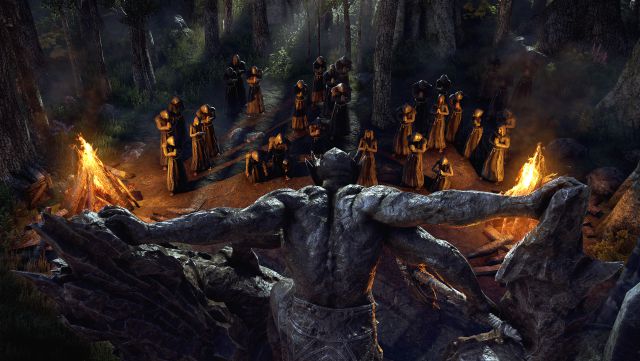 Elder Scrolls Online: We visit the Argonian and Imperial region offered by the Elder Scrolls Online mmorpg in its Blackwood expansion. Available now for PC and consoles. In the absence of any more information on Elder Scrolls VI since its announcement in 2018, Bethesda and Zenimax Online continue to pump up content for their most successful online game; The Elder Scrolls Online. To date we have visited Morrowind, Arteum, the beautiful Elsweyr region and even Skyrim thanks to their latest expansion; Greymoor.

On this occasion, as is usual in the mmorpg genre video game, it was time to enter another annual adventure that they have called Elder Scrolls Online: Blackwood, in which various playable improvements and a new region to explore have been added. To this must be added visual and technical improvements for the latest generation versions such as PlayStation 5 and Xbox Series X | S.

In Elder Scrolls Online: Blackwood players can delve into a story that occurred hundreds of years ago in which the Daedric prince Mehrunes Dagon has a lot to do with it. An assassination, pacts and the confrontation between the Argonian and the imperial races will be some of the most important keys in the history of this annual adventure.

To delve into it, the player must enter, thanks to a new tutorial for new users, the region that gives its name to the expansion; Blackwood. Swamps, the impressive city of Leyawiin, new Daedric enemies, challenges and new zone bosses will prevent us from discovering the secret behind Mehrunes Dagon.

The new story follows in the wake of others already lived before in terms of gameplay. The story arc is collected in a single episode that takes us from here to there for approximately 25 hours. Once it is completed, which is usually faster than you would have liked, you can continue our journey through the area by completing secondary missions that, as is the norm in ESO, are very interesting and really worked. Some even more than the story that gives rise to the new expansion.

The activities that can be developed in Blackwood are the typical ones that we have been doing since the base game. This time Zenimax Online has added nine new public dungeons, another for groups, new tough enemies – also known as World Boss – or a new gang dungeon for 12 players with two game modes. New chapters will be added throughout the year that will continue to expand the original story as well as increase the number of group dungeons.

In this annual adventure there are two very important novelties, one of them almost vital so that the game is even more enjoyable for those casual players or those who prefer to go solo around the world. We are talking about companions, non-player characters controlled by the game’s artificial intelligence with which we can complete almost any activity on the map alone. You will have to interact with them, answer questions, equip them with armor specific to them, assign them skills and offer them our confidence. It sounds strange, but if this partner gets irritated or angry with the player, we can say goodbye for a while since he will not come to our call.

Pokémon Legends Arceus: How Much Does It Take Up On Nintendo...