Home Entertainment Elden Ring Makes History: What Are The Games With The Highest Rating... 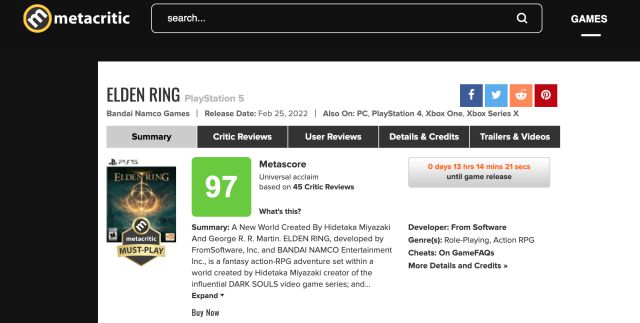 Elden Ring: After collecting dozens of media ratings from around the world, the new FromSoftware sends us a clear message: it’s a must. There are video games that transcend and that will be remembered over the years for what they imply in the sector. Regardless of whether we are more or less fans of souls, FromSoftware has agreed with the specialized critics of half the world with his latest work, Elden Ring, whose premiere this Friday, February 25, is destined to become an event. His 97 on Metacritic shows that we can’t miss, at least, the opportunity to play it and get to know it in the first person. Today we review the highest ratings in the portal’s history.

What is happening with Elden Ring

There are very few times that we have seen a score of 97 out of 100 in the most prominent aggregator portal on the scene, Metacritic, in the last thirty years. We are talking about names like Super Mario Odyssey, Grand Theft Auto V, Red Dead Redemption 2, Perfect Dark, Halo: Combat Evolved, Metroid Prime or The Legend of Zelda: Breath of the Wild. This is the scope of the video game that is the protagonist today, whose design and approach to the open world promise to take a step forward.

From FreeGameTips we continue working on the analysis with the aim of being able to offer you the most complete and detailed text possible. We have very little left.

Next, we leave you the titles with the best rating in the history of Metacritic. How many of them have you played? Do you agree with these ratings? Masterpieces of our medium.

The highest marks in the history of Metacritic

Elden Ring, developed by FromSoftware and published by Bandai Namco Entertainment, will go on sale this February 25 on PC, PS5, PS4, Xbox Series X | S and Xbox One.