Home Entertainment Elden Ring: how to get and cast spells 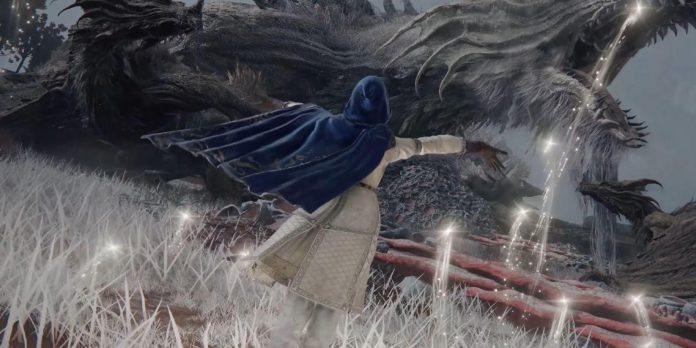 Incantations in Elden Ring vary much more than Miracles in previous FromSoftware games. Before, Faith-based spells were almost entirely restricted to healing, buffs, and dealing damage to Undead specifically. In Elden Ring Incantations function almost like a combination of Miracles and Pyromancies from Dark Souls 3, with even more variety thrown in there on top.

Updated July 1, 2022 by Erik Petrovich: In Elden Ring casting Incantations as your primary means of damage is much more viable than in previous FromSoftware games, thanks in part to the ease of access and variety of spells the game provides. When it comes to how to cast Incantations Elden Ring makes players use an item called a Sacred Seal, which can be bought just an hour or two into the game if not starting as a class with one. Knowing how to cast Incantations in Elden Ring is only half of it – you also have to know where to look for more spells. Many Incantations can be found on the ground as pickups, sure, but the majority of powerful ones can only be purchased from certain vendors or earned as Quest rewards.

Some Classes Start With Incantations

There are two classes in Elden Ring that start the game with the ability to cast Incantations, though their options are relatively limited. The Prophet starts with the Heal incantation, which heals the caster and nearby allies for a mid-size amount of HP, as well as Catch Flame, which creates a quick blast of flame at point-blank range.

The Confessor, on the other hand, starts with Urgent Heal, which only heals the caster for a pretty small amount of HP, and Assassin’s Approach, which silences movement and reduces fall damage. Assassin’s Approach, a spell that is most obviously suited for Stealth playstyles, is an example of how different Incantations are to Miracles from previous FromSoftware games.

How To Get Incantations in Elden Ring

There are a few places where players can get Incantations in Elden Ring, mostly as pickups spread throughout the world. Additionally, though, there are several vendors throughout the Lands Between that sell an assortment of Incantations. Some Incantations are even given as rewards for quests. If you don’t choose a class that starts with Incantations, your first order of business should be getting a Sacred Seal.

Sacred Seals are the casting tool Elden Ring uses for Incantations, like the Staff for Sorceries. A basic Sacred Seal, the Finger Seal, can be purchased from the Twin Maiden Husks in Roundtable Hold for 800 Runes. To get to Roundtable Hold in the first place, you should receive an invitation after a few hours in-game if you haven’t downed any major bosses.

Once the player has made it to Roundtable Hold, a merchant becomes available to purchase additional Incantations from. Brother Corhyn can be found in the room with the Table of Lost Grace – look for the NPC who looks almost exactly like the default Prophet (including a wheel around his neck). Brother Corhyn sells Incantations, but he doesn’t sell Seals.

Later in the game, players meet Miriel, who sells support-oriented Incantations, D the Hunter of the Dead, who sells Fundamentalist spells, Gowry, who sells Rot Incantations, and Gurranq the Beast Clergyman, who sells Bestial Incantations. Of these five Vendors, Brother Corhyn and Miriel are the only ones who can accept Prayerbooks to expand their Incantation selection.

Certain NPCs in Elden Ring give players new Incantations as rewards for completing their quests. Gideon Ofnir gifts Incantations like Lord’s Divine Fortification and Black Flame’s Protection as you steadily tell him more and more about the Shardbearers – being considered a “true fellow” by the All Knowing does have its benefits.

The Beast Clergyman steadily gifts Beast Incantations and related items as you feed him more Deathroot, too. Gowry’s Rot Incantations can only be acquired after progressing his and Millicent’s questline and then showing interest in the subject when talking to him.

How To Cast Incantations In Elden Ring

Incantations and Sorceries are performed the exact same way, though of course with different casting tools Elden Ring provides. If you don’t already have any, buy some Incantations from Brother Corhyn to assign at a Site of Lost Grace. When you next rest at a Site of Lost Grace, select “Memorize Spell”, which brings up a screen showing your current Memory Slots and spells in your inventory.

Equip the Incantations you want to cast here. Exit this menu, make sure you have your Seal equipped, and press the corresponding shoulder button to cast your currently selected Incantation, your seen at the top of the quick select menu on the bottom left. To toggle the currently equipped Incantation, just press up on the D-pad to cycle through your memorized spells. Like Heavy attacks, Sorceries, and some Weapon Skills, for casting Incantations Elden Ring usually lets players charge up offensive spells for more damage without using more FP.

Elden Ring is available on PC, PlayStation 4 and 5, and Xbox One and Series X|S

The Witcher: What we suspected of the two actors who earn...