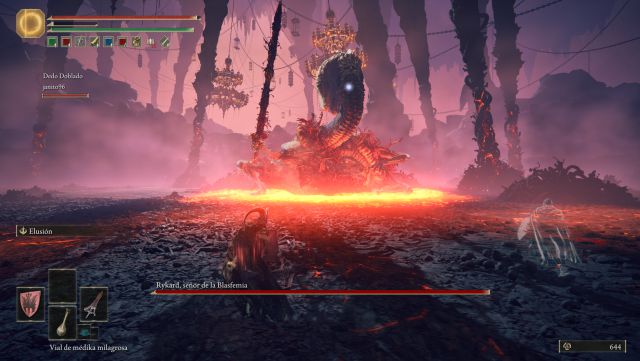 Elden Ring: We help you fight Rykard deep inside the Volcano Mansion. End it with the best tips and strategies to deal with it. As part of the Volcano Mansion in the Elden Ring, in the previous chapter we helped you locate Rykard, Lord of Blasphemy. And in this part we tell you the best tips and tricks to kill it without problems. Because, despite its appearance, it is one of those battles that hide a special secret and make it much easier for you to achieve victory.

How to defeat Rykard, Lord of Blasphemy

The combat is affordable, but it has a trick. Remember that fight in Demon’s Souls where you needed a special sword to take him down? Well, exactly the same thing happens here. As soon as you enter the battle area, you can pick up a key weapon to your left. It’s called Serpent Hunter and it allows you, with two hands, to use a skill that hits from a distance and does a lot of damage to this boss. And not only that; it also helps you hit him without needing to step into the fire around him. Best of all, you can attack from anywhere, because it doesn’t matter if you hit his head, tail, or body.

The enemy throws flames that you can avoid by running to the side and around to the back of him, and also some blows with his sword that, although it covers a lot of ground, you can dodge by rolling to the side. For the rest, it is enough to repeat without rest the special attack of the sword. Of course, remember that using it consumes CP, so a good tip is to allocate the charges of the vial in a Grace to have 3 or 4 CP potions.

Finally, there is something very interesting that you should keep in mind: when you summon an allied player in this battle, if it turns out that he already got this sword in his game, in this battle he will once again have the special ability that makes the boss vulnerable . Of course, we remind you that once you achieve victory, outside of this fight the sword behaves like a normal weapon.

TemTem: The Best Guide to TemTem for Beginners