Home Entertainment EGRET II Mini, A Wonderful Journey To The Past Of The Glorious... 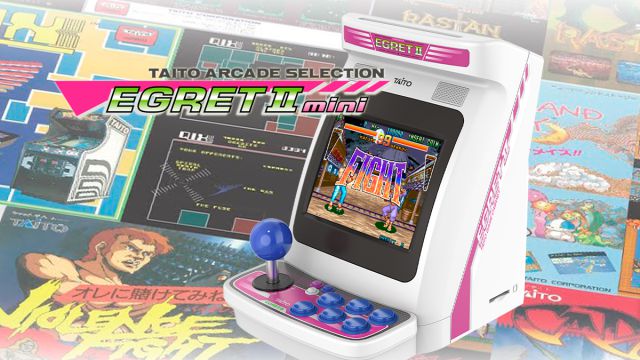 EGRET II Mini: The new miniaturized arcade that bursts onto the market is a careful product with a large selection of games such as Puzzle Bubble, Rayforce, Darius Faiden or Rainbow Islands.

The history of the legendary Taito is more than curious. Established in the Shinjuku region, within the Tokyo metropolitan area, in 1953, it was founded by Michael Kogan, a Ukrainian businessman who escaped from the communist regime in his country to settle in Shanghai first, under the Taitung label, to later end up in Japan. fleeing the thriving communist revolution in China and starting over under the name Taito Trading Company. As with other classic Japanese companies at its foundation, its business did not start with video games, then unknown to the general public. It was initially a vending machine import company and was also established as the first vodka refiner in Japan. The second was a success, but he soon found local proposals that made him an impossible competition to beat.

As for the machines, Taito did not have a license to import the juiciest of the moment, the musical jukeboxes that gave life to bars and clubs. To get around that, he toured American bases established in the country after World War 2 to collect broken machines, fix them and put them up for sale in the local market. An agreement with the manufacturer of the well-known AMI brand made it the official distributor of its machines in the land of the rising sun, achieving resounding success by mixing Japanese melodies with American folk music, which consolidated the business and allowed the company to put its sights on a new market with potential: electromechanical games. In the 1970s the company would become Taito Corporation and a young engineer named Tomohiro Nishikado would start working for it, creating several games through the study and dissection of Atari’s Pong. In 1978 he would create Space Invaders, at which point the story became a video game legend.

Taito’s history remains strongly associated with arcades, although the licenses for some of its most famous games became long-awaited blockbusters for fans back in the day, with games like Bubble Bobble and Rainbow Islands among some of its biggest hits. There was an attempt to reach the home format through a CD-ROM console, WOWWOW, which promised to bring games from arcades to homes, but it never came to fruition. The company focused on arcades, using its own boards (the classic F3 System and iterations of the Type X, which come almost to this day, although the company is no longer independent and is part of Square Enix.