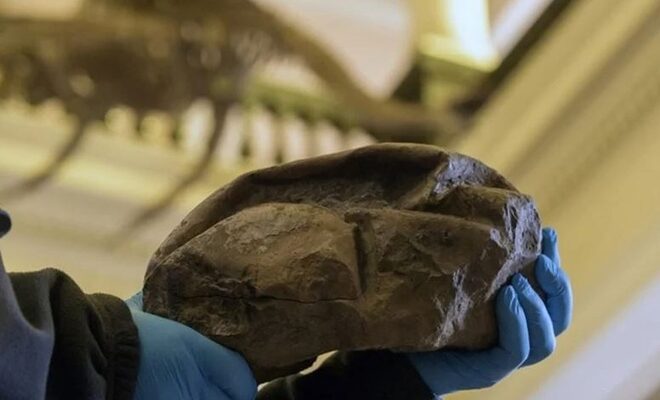 It is reported that the 68-million-year-old egg, about the size of a soccer ball, may belong to a marine reptile that lived in the region of Antarctica during the dinosaurs period.

The mystery of a fossil discovered in Antarctica in 2011 and hiding in a museum in Chile since then has been uncovered in a new study. Scientists who studied the fossil determined that the fossil was a prehistoric marine reptile soft shell egg.

Chilean scientists found a soccer ball-size fossil during their study in Antarctica in 2011. Scientists called the fossil “thing” because the mystery of the fossil, which had a large crumpled potato-like appearance, could not be solved.
The mystery of the fossil, the size of a soccer ball, has been solved with a new analysis. The new analysis revealed that the fossil was the soft shell egg of a prehistoric sea reptile. The scientists who carried out the study think that the 68-million-year-old fossil will provide new information about the evolution of sea creatures.

Lucas Legendre of the University of Texas, a scientist working on the fossil, explained that well-preserved soft-shell egg fossils can be found very rarely. “This new egg is the largest soft shell egg ever discovered,” says Legendre. “We did not know that these eggs could reach such a large size, and when we assume that they are the eggs of a huge sea reptile, it can also be a unique clue about the breeding strategy of these animals.”

The egg fossil found in Antarctica in 2011 has a size of 28×18 cm. The scientists who found the egg could not develop a hypothesis about the egg because of its size, appearance, and lack of a skeleton to confirm its origin.

The new analysis made it possible to reveal the parts of the fossil. The results of the analysis revealed that the egg has a layered structure similar to a soft membrane and a much thinner harder outer layer that suggests a soft shell.

The scientists who conducted the analysis think that the egg is not a dinosaur egg. This thesis is based on the findings that dinosaur species living in Antarctica were too small to form such a large egg. Researchers think the egg is the egg of a group of reptiles known as Mosasaurs, who lived prehistoricly in the Antarctic region.

Another study points to the presence of soft shell dinosaur eggs

Nature suggests that the only living species that have soft shell eggs are not prehistoric reptiles. Scientists, the author of the article, claim that dinosaurs also form soft shell eggs.

Scientists working on dinosaurs had long thought that dinosaurs only had hard shell eggs. However, the study of a group of fossils in Mongolia may cause this assumption to be revised.

Mark Norell, from the American Museum of Natural History, who took part in the discovery of a group of fossilized embryonic Protoceratops dinosaurs in Mongolia, created a thesis on the question of why only late dinosaurs have eggs. Norell’s answer to this question was that the soft shell eggs of the early dinosaurs were destroyed.

To test this theory, Norell and his colleagues analyzed the fossils of Protoceratops skeletons in Mongolia and the fossils of two seemingly newborn Mussaurus. As a result of the analysis, chemical signatures were found showing that the dinosaurs were surrounded by soft egg shells.

The study of Mark Norell and his team may change the thesis that the soft shell egg found in Antarctica belongs to a marine reptile. For this, new analyzes must be made on the egg fossil. The consequences can also lead to changes in what is known about dinosaurs.

Bill Gates Announces First Coronavirus Vaccine May Be Ready for 9...

Scientists Think They Might Have Found A New State Of Matter