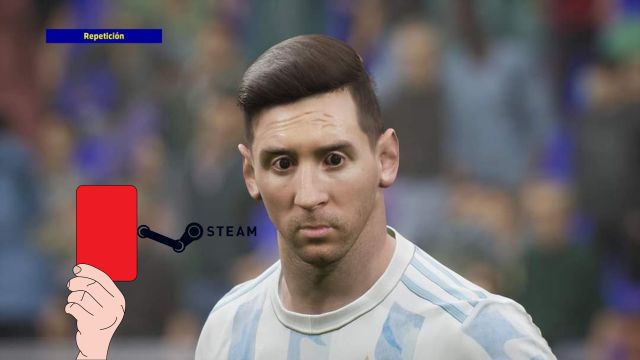 eFootball 2022: Konami’s football simulator debuts in the free-to-play model with a video game highly criticized for bugs. The ball started rolling a few moments ago, but the referee (in this case the users) have already taken the red card. eFootball 2022, the new version of Konami’s football simulator, had raised the eyebrows of many PES fans, who saw the series abandon its old name to embrace the free-to-play model. The worst fears have been fulfilled, at least when it comes to receiving the title. According to Steam 250, the game has the worst rating ever on Steam.

User reviews have placed it in the lowest position, and that in the Steam library there are thousands and thousands of video games analyzed. Konami’s proposal has reaped a meager 8% out of 100, thus unseating Flatout 3 as the lowest valued title on the platform. The Japanese company will have a difficult time reversing the barrage of criticism, which threatens to sink the legacy of a memorable saga.

The truth is that the first hours of eFootball have not been anything flattering. In a very short time, the networks have been filled with memes, especially related to animations. Not even two of the great stars of contemporary football, Lionel Messi and Cristiano Ronaldo, have been spared. Their expressions in the game have been mocked. Ansu Fati has also had the comic moment of him, when he has appeared with his arms in an unnatural position.

eFootball 2022 is available on mobile, PS4, PS5, Xbox One, Xbox Series X, Xbox Series S, and PC. The product that was just released is something of a demo, as it will be in November when the big fall update debuts. Later, Konami will introduce new game modes and expand other aspects of the title, not to mention the graphical improvements in the new generation, which will be implemented later.

Star Wars: The Book Of Boba Fett Brings Together All Its...