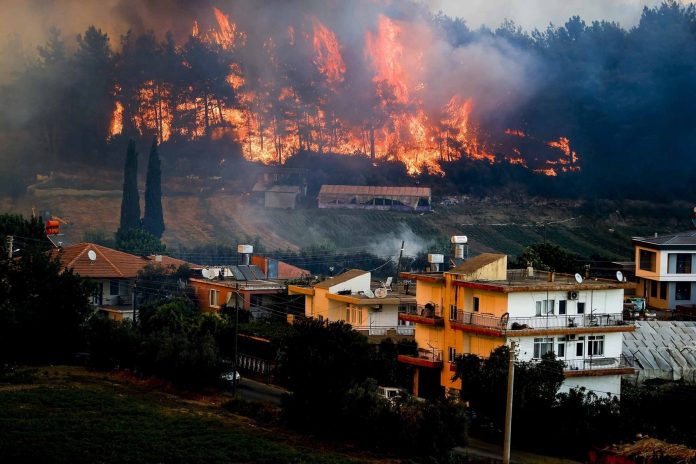 Turkey Antalya Metropolitan Municipality Mayor Muhittin Böcek said that they supported the forest fires in Manavgat with 213 vehicles and 481 personnel and that 34 neighborhoods have been damaged so far.

Antalya Metropolitan Mayor Muhittin Böcek, Manavgat He said that they supported the forest fires in Istanbul with 213 vehicles and 481 personnel and that 34 neighborhoods have been damaged so far. In a statement, Insect stated that all teams were mobilized to bring the fire under control.

Manavgat District Police DepartmentIndicating that he participated in the evaluation meeting organized by Deputy Minister of Interior Mehmet Ersoy in Antalya Metropolitan Municipality He stated that the General Directorate of ASAT continues to provide water to the neighborhoods.

Emphasizing that ASAT is working in the field with 14 shovels, excavators, 13 water sprinklers, and 194 personnel, insect said, “Works to provide water to the neighborhoods with 10 generators continue. 37 of the 106 neighborhoods of Manavgat have been supplied with water so far. Water supply work continues for 69 neighborhoods. “We are having difficulties in supplying water because there is no electricity. Our sprinkler and generator reinforcements will continue.” made its assessment.

Emphasizing that personnel and vehicle reinforcements came from many provinces to support the efforts to extinguish the Manavgat fire, Insect continued as follows:” Istanbulfrom 10 vehicles 100 personnel, Konya11 vehicles from Burdur8 vehicles from Izmir, Ankara, Myrtle, and Isparta6 vehicles from Eskisehir and MuglaThree vehicles from each support the work. Water is one of the most important needs in the region.

So far, 34 neighborhoods have been damaged. We support fire extinguishing efforts with 213 vehicles and 481 personnel.”Insect said that the distribution of water, ayran, and food from the mobile soup kitchen continues to the personnel working in the region and that they have started work in the region for stray animals, owned animals, cattle, small ruminants, and wild animals.

WHO Named New Coronavirus Variant “Omicron”: There Is A Higher Risk...