Home Entertainment Edward Norton and Mark Ruffalo Were Actually Joking About the Hulk Even... 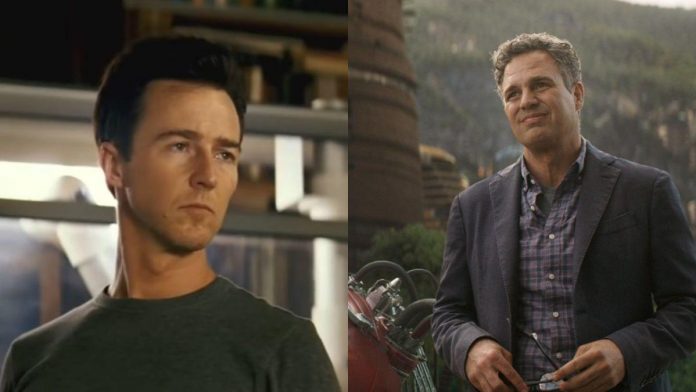 Don’t let yourself be smashed by the spoilers of the Hulk Woman ahead!

We lived in a world where there were many—I would say too many—actors playing the same iconic superheroes. There are three different guys playing Spider-Man (and that’s not counting animated films), and there seems to be an infinite number of actors who have taken on Batman. So to know Mark Ruffalo and Edward Norton as the Hulk, to be honest, is not so strange.

It’s fair to wonder if these actors are talking about the same roles in these films. It turns out Ruffalo and Norton had fun talking about their shared history as a big green monster long before the cheeky reference in the latest episode of She-Hulk: Attorney At Law, and Mark Ruffalo recently told Entertainment Weekly about their conversations. Said the actor,

I even joked with Ed about it. I thought: “It’s like the Hamlet of our generation.” Everyone is going to try. And there will probably be another couple before it’s over. People will be like, “Remember when the Hulk was like Mark Ruffalo? Now he looks like Timothy Chalamet.

All this became known after the release of the second episode of She-Hulk. In the series, the transfer of the Hulk from Norton to Ruffalo was mildly mentioned. Jen Walters, also known as the Hulk Woman, calls her cousin to tell him that she is taking the case of Abomination, the villain from the Edward Norton film about the Hulk. While talking to her on the phone , Mark Ruffalo’s Hulk approves of her taking the case and says:

That fight was so many years ago that I’m a completely different person now — literally.

Jen then looks directly into the camera and laughs, giving a nice little confirmation to the audience that the show is really just referring to an exchange of actors. Thus, unlike the Spider universe or the MCU multiverse, Edward Norton’s Hulk does not exist in a parallel universe. Bruce Banner just changed his appearance from Norton to Mark Ruffalo.

Both actors had a good sense of humor about the unusual casting situation. While Mark Ruffalo named Timothy Chalamet as the future Hulk, Edward Norton stated that, in his opinion, Bill Bixby, who played the big green guy in the 1978 TV series, will always be the best Banner. The stars called the Hulk a version of Hamlet, in which many actors can step into the role and give it their own sound.

Last year, Marvel attracted characters from various studios and franchises to the Marvel cinematic universe. The unification of Spider-Man (Man?) in the movie “Spider-Man: No Home” was a turning point that blew up the Internet. Andrew Garfield, the New Spider-Man, revealed that he had quite a lot of fun trying to keep the surprise a secret and lying about his return to Marvel.

In Spider-Man: There is No Way Home, we also saw the return of Daredevil Charlie Cox, who played a role in the Netflix show of the same name. Charlie Cox will be actively involved in moving the MCU forward, and it is confirmed that he will return as Matt Murdock in The Hulk Woman movie, but with a lighter tone than we are used to. Perhaps Ben Affleck will someday repeat his version of the devil from 2003’s Hell’s Kitchen, continuing the fun with the participation of several actors in the comic book movie franchise.

Marvel’s “Hulk Woman” will continue to release episodes in the coming weeks on Disney+. I am sure that even more surprises are waiting for us and even more theories will be invented. Rumors are already circulating on the Internet about the Hulk’s last moment in the movie “The Hulk Woman” and his future participation in upcoming MCU projects.

If there’s one thing we’ve learned from this, it’s that Marvel’s cast selection seems to always find a way to make sense of the story-or at least turn it into a hilarious joke.

Beast Reviews in, See What Critics Have to Say about Idris...

10 films that fired the director right in the middle of...