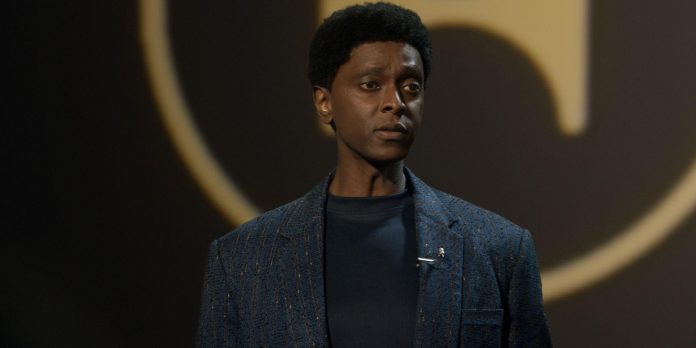 For All Mankind season 3 introduces Edi Gathegi’s Dev Ayesa, the CEO of a private space exploration company called Helios. The Apple TV+ series explores new horizons through a three-way race to Mars involving Helios, NASA, and the Soviet Union taking place in the midst of an alternate depiction of the 1990s. The son of an African immigrant, Dev is a highly ambitious individual determined to colonize Mars and the rest of the solar system. However, For All Mankind season 3 sees Dev endure his fair share of adversity when the combined crew of NASA and the Soviets land on the Red Planet before Helios’ Ed Baldwin (Joel Kinnaman)-led team.

Gathegi notably starred alongside Adam Brody in the TV series StartUp from 2016-2018. The Kenyan-born actor has also appeared in X-Men: First Class, Gone Baby Gone, and The Twilight Saga: Breaking Dawn — Part 2. Gathegi most recently played Bill Pickett in the Netflix movie The Harder They Fall.

Related: Dev & Helios Are Exactly What For All Mankind’s Mars Race Needed

Gathegi told Screen Rant about how he became involved in For All Mankind season 3, the rationale behind Dev’s actions, and more.

Screen Rant: Had you seen the show before joining the cast? What were your impressions of it from the outside?

Edi Gathegi: I’m actually really good friends with Noah Harpster, who plays Bill Strausser, and he told me that he was on a little show called For All Mankind, and it was the biggest set he had ever been on, and they throw millions and millions of dollars into these sets and you never experience anything like that. I was so excited to watch it and then life got in the way. When the conversations started for me joining, I went, “Oh, that’s my friend Noah’s show, I gotta watch it!” I watched it and I said, “Yeah, I gotta do this.”

Even though For All Mankind is an alternate history, it reflects the real world in a lot of ways. With Dev, it’s the rise of privately-run space travel companies. How much did you feel like you were acting in a future reality for our world in terms of seeing a Mars landing unfold?

Edi Gathegi: I think that’s in many ways what their intention was, the showrunners, that these things are sort of happening in tandem. But I did not think about that, to be honest. That’s just kind of what’s happening. That’s like the reality of what’s happening, but for Edi playing Dev, I’m breaking new ground and doing something that hasn’t been done before and that wouldn’t be done unless I did it as a character. I think it just gets really complicated when it becomes a race.

Dev is so fascinating because he has a genuine ambition as a leader but also we’ve seen his ego corrupt him at times. How did you approach highlighting the nuances of his character?

Edi Gathegi: It’s a really delicate balance of extreme focus and passion for your life’s work, and then balancing that with humanity, daddy issues. All the stuff that makes us complex human beings has to exist in this character and at the same time, he can be a machine, a focused killer when it comes to achieving his goal.

Did you take inspiration from any real-life people in your portrayal of Dev?

Edi Gathegi: Not necessarily. There is a moment that I drew inspiration from a real-life powerful tech company owner, Steve Jobs. Aside from that, I didn’t really draw inspiration from any other source other than what it would be like to be Dev, what it would be like to have created a company of this stature, and to have the goals that he has and what it takes to achieve those goals and execute the daily plans.

Dev works closely with Ed Baldwin and Karen in season 3. How does their presence impact the way Dev approaches his work?

Edi Gathegi: Dev is just a “best ideas win” kind of guy. There’s a little bit of nostalgia with Ed Baldwin and what Ed was able to achieve, so that’s kind of like a cool “I’m hanging out with Babe Ruth.” But really, at the end of the day, Babe Ruth is useless and we just have his collectors item and move on and find the best qualified person for the job, but he happens to think that it could still be Ed. So, Dev is primarily focused with success and success within his goals, within his business. So, he’s going to surround himself with people that can help him get there best.

I want to talk about the scenario in episode 4 when Dev argues against rescuing the Soviets and then locks his crew out of their own controls. I’ve heard a lot of different takes on this, so I’m interested if you believe his actions here were understandable.

Edi Gathegi: We achieved our goal. The goal was to polarize the audience, and that’s why you hear both sides of it. For me, it depends on what day you ask me. If you ask me on a Tuesday, I’ll go, “Yeah, the Russians rushed it and they shouldn’t have done that.” By the way, look at what the Russians did. I don’t know if we’ve gotten to that point in the story yet, but look at what happened to [Dev’s] father because of the Russians.

For Dev, his choice to move on without rescuing the Russians is 100% justified because of what he’s been through and where he’s at. You know what? I’m actually going to make a stand and say Dev is a private company. He has amassed his wealth without the help of the government, more or less. The government is trying to win a race and this government’s priority should be to help people. So, I think Dev deciding to let the government do that rescue is the right decision because they can whereas Dev might lose his money.

Dev falls short of his goal when Helios doesn’t land on Mars first. Does that humble him at all? How do you feel that changes his approach to the crew’s mission?

Edi Gathegi: Yeah, he’s one million percent humbled. I think this is his worst nightmare. It’s really cool that they allow the space for this really strong and powerful CEO to be rocked and to become vulnerable because it’s a real moment. He’s suffered a loss. It does humble him and he doesn’t run away from that.

I find it interesting way Dev pushes the idea of an egalitarian workplace, which fails to acknowledge his heavy influence on those around him. Do you think he meant for Helios to run this way from the start or is this more reflective of the way power can corrupt over time?

Edi Gathegi: That’s a tough question. I don’t know the moment-by-moment, day-by-day, but I would almost say that — and I don’t know if this would be true or not — that it was designed to work this way because he’s always been the parent. With a parent, it’s like you let your kids think that they’re making the decision but you’re kind of guiding them. The company is his baby and the people that work at the company are his children. So, “I’m gonna let you smoke your weed, but you’re gonna do it in the house so I know you’re safe.”

What do you hope is next for Dev in season 4 and beyond?

Edi Gathegi: It doesn’t matter what I hope to see, because these writers do a really great job of going left when you think you’re going right. I just hope for more complex storytelling, more human moments. I’d like to see Dev have a personal life and what that would be like.

For All Mankind Season 3 Synopsis

In season three, the Red Planet becomes the new frontier in the Space Race not only for the US and the Soviet Union, but also an unexpected new entrant with a lot to prove and even more at stake. Our characters find themselves going head-to-head as their ambitions for Mars come into conflict and their loyalties are tested, creating a pressure cooker that builds to a climactic conclusion.

Check out our other interviews with For All Mankind star Casey W. Johnson and writers Ben Nedivi & Matt Wolpert.