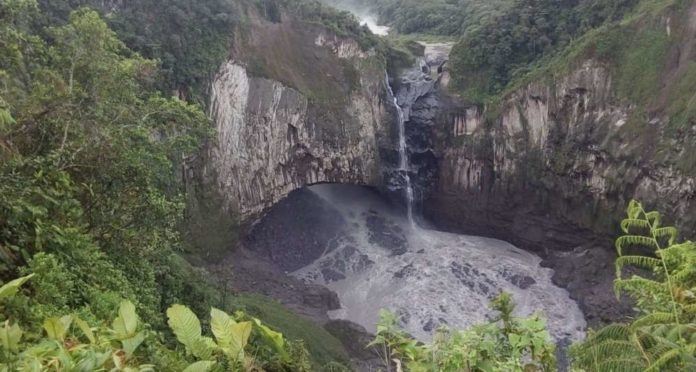 It was announced that Ecuador’s longest waterfall disappeared as a result of landslides. The waterfall in a wildlife park has nothing but a small stream of water.

One morning in February of this year, the Ecuadorians met with an unexpected sight: the country’s largest waterfall was no longer there, a small stream replaced it. This event, which resembles the moves of bad characters in cartoons, was real.

Located in the Ecuadorian Amazons, Cayambe Coca National Park was hosting the 150-meter-high San Rafael Waterfall. On February 2, the Minister of Tourism of Ecuador announced that the waterfall started to flow like a small stream.

Landslides swallowed the waterfall
The English-language sources stated that “San Rafael Falls is now history and will never come back.” This unusual and sudden change has also been documented by the Ecuadorian Ministry of Environment (MAE) and NASA images.

According to the Ministry of Environment statement, landslide occurred on 2 February on the Coca River. The areas around the river and the waterfall were closed to tourist visits, and work began to determine how much the situation damaged the biodiversity in the region.

The reason for the disappearance of the waterfall is the formation of pits where water collects during landslides. The water collected in this pit is divided into three and is distributed by three less steep arms.

The cause of landslide is unknown
San Rafael Waterfall is located in an area where normally very active and seismic activities are intense. There are Cayambe and Reventador volcanoes in this region. Naturally, it is not surprising to experience landslides for natural reasons.

On the other hand, Emili Cobo from the International Environmental Protection Union’s South American Water Program shows the newly built hydroelectric power plant as the culprit of this event. Cobo said, “The waterfall, which has been standing for thousands of years, collapsed a few years after the hydroelectric project was built. “There are reports of the processes in the academic articles and the effects of the dam on the river”.

According to the theory, Coca Codo Sinclair, one of the largest hydroelectric power plants in the country, needs to filter the water in order not to damage the equipment. The decrease in the amount of sediment makes the riverbed more susceptible to such abrasive effects.

Whatever the reason, the waterfall no longer exists, and its old glorious days remained in photos and videos. San Rafael Waterfall has taken its place among the natural beauties that have disappeared.