Home Tech Echo in Overwatch: learn all about the game’s new playable character 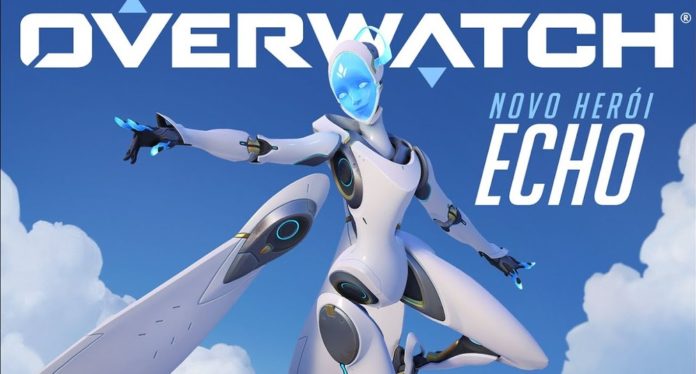 Echo, the long-awaited new hero of Overwatch, is now available to be used in all games on PC (Battle.net), Nintendo Switch, PS4 and Xbox One. The character was released in an update this Tuesday (14) , and has been a well-known figure among fans since 2018, when he appeared at the launch of another hero, McCree. Since then, Blizzard, the company responsible for the game, has been one of the heroines most requested by the gaming community.

Echo will be the latest addition to Overwatch, at least until Overwatch 2, a sequel announced at Blizzcon 2019 but still with no official release date. The character could already be played on the PC since March 19, but only on the PTR, space for testing the game’s novelties. Now, it has been officially added to Overwatch, playable in all matches after some adjustments. Here are some features about Echo below.

Gameplay
Echo surprised the Overwatch fan community by being considered very strong. His abilities include a limited time flight that allows for very high mobility, in addition to three other abilities that cause damage and the ultimate attack, when Echo becomes another character.

Echo’s primary shot fires three projectiles from his fingers in a triangular pattern, and his secondary shot launches bombs that stick to a surface and explode after a few seconds. In addition, the first ability fires a cylinder of light that also damages enemies, especially those who are less than half their health. Echo’s second skill is geared towards mobility, allowing the heroine to fly for a few seconds after being projected in the direction the player chooses.

Finally, Echo’s supreme skill is one of Blizzard’s most drastic innovations in Overwatch. For a few seconds, Echo can transform into any character on the enemy team, being able to use all abilities, including the supreme. This can suddenly change the fate of a battle, since for a few seconds the team can gain an extra tank or support, or other damage characters like Shadow that can hinder the performance of the opposing team.

Heroes who have supreme abilities, such as D.Va, who launches a bomb with long range, or Reaper, which can cause very high damage around them, can appear without warning on the enemy team. That is, they leave little time to react to these attacks.

Story
Echo’s origins begin with his creator, Dr. Mina Liao, from Singapore, one of the greatest robotics experts of his time. The scientist is responsible for developing the technology that created the Omics, robots that were used to assist humans and would later go on to revolution. It is in this context, known as the Crisis of the Omics, that an organization of heroes emerges to fight the insurgents and restore order, Overwatch.

Having been responsible for creating the Omics, Dr. Mina Liao also feels guilty about the world crisis caused by her creatures. Despite this, one of the founders of Overwatch, Jack Morrisson (Soldier 76), invites the scientist to be part of his organization precisely because he is the developer of the technology that today threatens humans.

Thus, Dr. Liao begins to perfect his technology secretly, creating Project Echo, a robot with artificial intelligence capable of learning just by watching. After an attack on an Overwatch base, Dr. Mina Liao dies but Project Echo is still alive, and it is this robot that becomes a playable character in the game.

Overwatch director and vice president of Blizzard, Jeff Kaplan, has already commented that not all information about Echo has been released. Fans should learn even more about Dr. Liao’s creation over time.

Cosmetic items
Echo has already arrived with some skins available, as well as emotes, sprays, victory poses and outstanding presentations. However, dubbing in Portuguese is not yet available. Echo’s speeches, including within the match, can only be heard in English for now. Blizzard justified itself by saying that, due to the quarantine against the new coronavirus (Covid-19), the Brazilian studios that dub Overwatch are not working, so fans will have to wait a while before hearing Echo’s voice in Portuguese.