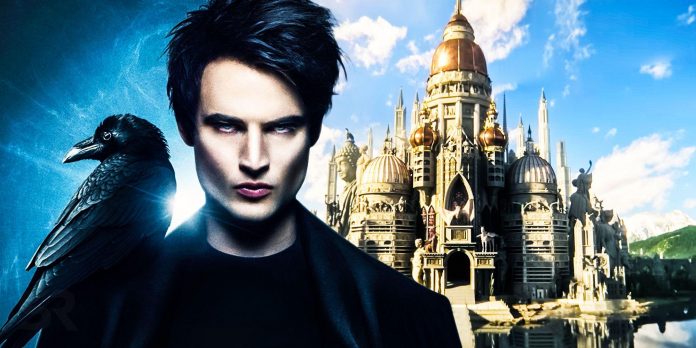 Warning: The following contains SPOILERS for The Sandman season 1.

Netflix’s adaption of The Sandman is full of Easter eggs and references to the stories that inspired it. Naturally, this includes a number of nods to the DC Comics universe, which The Sandman books were originally set in before becoming a universe unto themselves. Yet there are also a number of visual and literary Easter eggs involving minor characters and concepts that didn’t merit lengthy exposition or formal introductions.

The importance of The Sandman to modern literature cannot be understated. Considered to be the first great work of Neil Gaiman (who also wrote American Gods and co-wrote Good Omens with Terry Pratchett) The Sandman was one of the first graphic novel series aimed at mature readers to push the idea of comics being capable of more than simple superhero stories. It went on to win multiple awards, including the World Fantasy Award for Best Short Story, despite the protests of many at the time that a mere comic book should not be considered for something so prestigious.

Related: The Endless Family Tree: All Of Dream’s Siblings Explained

The new Netflix series is a perfect distillation of the source material. Much of Gaiman’s original dialogue and the aesthetics of the many artists who brought the world of The Sandman to life over the years have been woven into the fabric of the show. Here is a rundown of all the Easter eggs and references in The Sandman season 1.

The Denizens of the Dreaming

The opening scene of The Sandman episode 1, “Sleep of the Just,” dramatically establishes the divide between the Dreaming and the Waking World. Following the flight of Jessamy the Raven between realms, the camera pans over the Dreaming and enters Dream’s castle. As it does so, Martin Tenbones and Mervyn Pumpkinhead are briefly seen before their speaking roles in later episodes. The Gatekeepers of Dream’s castle, a wyvern, a griffin, and a hippogriff, are also shown as Jessamy flies through the gates.

Released in six parts from 2013 to 2015, The Sandman: Overture was a prequel to The Sandman depicting a battle that was referenced but never shown. Netflix’s The Sandman recreates two scenes from Overture in a modified form. In the first, Lucienne speaks to Morpheus about “a presentiment” that he may not return from his upcoming journey. In the second, Morpheus confronts the teeth-eyed nightmare called The Corinthian regarding his killing mortals, establishing that the Corinthian went rogue long before Morpheus’ capture.

All The Original Art Nods

There are many shots throughout Netflix’s The Sandman season 1 which are Easter eggs replicating famous panels and splash pages from the original comics. The moment in which Morpheus is trapped within a binding circle is one of the most dramatic. Another moment, famously featured in the first trailers for The Sandman, depicted a naked Morpheus’s escape into a glowing portal.

Related: The True Story Of The Sandman’s Sleeping Sickness Of 1916

The Curse Of Eternal Waking

In Netflix’s The Sandman, Morpheus punishes Alex Burgess with “the gift of eternal sleep.” When Alex is shown later, he appears to be convulsing as if trapped in a nightmare. The comics fully depict the nature of this curse, in which Alex Burgess kept waking up from a nightmare only to discover he was trapped in an entirely different nightmare, which the comics’ Morpheus artfully dubbed “Eternal Waking.”

Neil Gaiman created many unique characters for the cast of The Sandman comic but also honored the legacy of the DC Comics horror series that preceded The Sandman. Cain and Abel are the most famous example of this, being modeled upon the hosts of the anthology series House of Mystery and House of Secrets. The Three Witches, who offer Morpheus a prophecy in their form as the Hecateae, were the hosts of The Witching Hour. Even Lucien the Librarian, now long associated with The Sandman, first found life as the host of Tales of Ghost Castle, which only lasted three issues. The abandoned Ghost Castle in Transylvania, which Lucien maintained in the absence of his master, was later retconned to be Morpheus’s palace at the heart of the Dreaming.

When Morpheus returns to the Dreaming at the end of The Sandman episode 1, “Sleep of the Just,” Lucienne mentions one of the Endless abandoning their responsibilities. This is a reference to the prodigal Endless sibling, Destruction, who is the avatar of change and endings that bring about new beginnings. Destruction is mentioned later in The Sandman episode 6, “The Sound of Her Wings,” when Dream asks Death if “the Prodigal” showed up during his absence. Despair also inquires if Desire has news regarding the Prodigal when they meet in The Sandman episode 7, “The Doll’s House.”

Dream A Little Dream Of Me

The Sandman episode 3, “Dream a Little Dream of Me,” adapts the third issue of The Sandman comic, where the warlock and con artist John Constantine assisted Morpheus with finding his stolen pouch of magical sand. The Netflix series adaptation presents a female version of John Constantine named Johanna Constantine but makes a number of nods to the original Hellblazer comics which crossed over with The Sandman. The opening nightmare sequence features the Cassanova Club from the Newcastle Incident, in which Constantine failed to save a girl named Astra Logue from the forces of Hell. One of the club posters references Constantine’s punk band, Mucous Membrane. The episode also name-drops some of Constantine’s friends and former lovers, including Chas Chandler and Kit Ryan.

When Matthew the Raven first appears in The Sandman episode 3, he says little about his background beyond having died in his sleep a few hours before Lucienne recruited him to act as Morpheus’s messenger. The comics go into more detail, revealing that The Sandman’s Matthew was Matthew Cable from Swamp Thing, a friend of Alec Holland and first husband of Abigail Arcane. This was one of the many ways that DC Comics’ horror titles began to tie into the continuity that established the Vertigo line for mature readers.

The realm of Desire is contained entirely within a Fortress known as the Threshold. It takes the form of a giant statue of Desire, which changes shape to reflect Desire’s current appearance at any time. Fittingly, Desire makes their home in the literal heart of the Threshold. Netflix’s The Sandman episode 7, “The Doll’s House,” shows the Threshold from a distance in an establishing shot, as another Easter egg, but does not identify it by name.

Morpheus spoke with Mister Miracle and Martian Manhunter in the opening story arc of the original Sandman comics, establishing that he was a part of the same universe as the characters making up the Justice League. While Netflix’s adaptation does not confirm the existence of superheroes in its reality, the series does make a number of nods to DC Comics and Milestone Comics. For instance, when Rose Walker is helping her brother to pack, he is shown to have action figures of The Flash, Wonder Woman, and Batman. These same toys later show up in Gault’s command center, along with images of supervillains like the Psycho Pirate, Captain Cold, and Pied Piper. In another DC Easter egg, Jed is seen wearing a t-shirt featuring the electric hero Static, and later he watches an episode of Static Shock while he’s in The Corinthian’s hotel room in The Sandman episode 9, “Collectors.”

Between the time of DC Comics’ first Sandman — a detective armed with sleeping gas named Wesley Dodds — and Neil Gaiman’s creation of Lord Morpheus, a.k.a. Dream of the Endless, there was another heroic Sandman. Originated in 1974 by Captain America creators Joe Simon and Jack Kirby, this Sandman acted as a guardian of children, protecting them from nightmares sent by the evil Nightmare Wizard. Netflix’s The Sandman features an Easter egg paying homage to this version of the Sandman by casting Jed Walker in that role in the pleasant dreams created for him by the nightmare Gault.

Related: Every Name & Title Dream Has Had In The Sandman

Revered as “the Prince of Paradox,” English author G. K. Chesterton had a considerable influence on Neil Gaiman, whose work he grew up reading. Gaiman paid tribute to Chesterton in the original The Sandman comics by modeling the character of Gilbert upon him. Netflix’s The Sandman also references and honors the author, with Gilbert discussing Chesterton’s writing in two separate scenes.

The Missing Killers At The Convention

In the latter half of season 1 of Netflix’s The Sandman show, the Corinthian is recruited to act as the keynote speaker at a serial killer convention after the previous guest of honor, The Family Man, proved unavailable. In the comics, The Family Man ran afoul of John Constantine in the pages of Hellblazer. Later, in The Sandman episode 9, “Collectors,” The Corinthian leads the convention organizers in going after a serial killer fanboy, who snuck into the convention by posing as a killer called The Boogieman. Unfortunately for him, the Corinthian knew the real Boogieman and knew that he had drowned in Louisiana three years earlier. This is a reference to Swamp Thing Vol. 2 #44, where the real Boogieman died after an encounter with the Swamp Thing. While there was no chance of the character showing up in The Sandman due to the character rights currently being tied to J.J. Abrams’ Justice League Dark, the Easter egg referencing the Boogieman still honored the connection between The Sandman and Swamp Thing.

The Arrival Of Azazel

In the final scene of The Sandman season 1, Lucifer meets with Azazel, a high-ranking demon who has come to report that the Lords of Hell have assembled and await Lucifer’s order to invade the Dreaming. In the comics, Azazel ruled Hell with Lucifer as part of a triumvirate of demons and fallen angels and went on to become the chief antagonist of The Sandman: Season of Mists storyline. His appearance here seems to be setting up a similar role in The Sandman season 2.

Many great artists worked on The Sandman comics, but Dave McKean is the one most associated with the series, having done the cover art for every issue as well as several of the collected editions. McKean directed unique animated sequences for the closing credits for every episode of Netflix’s The Sandman show, utilizing the same style as the original comic covers. Viewers should be sure to hit the “Watch Credits” button at the end of every episode of The Sandman to appreciate McKean’s work and how it references the comics.