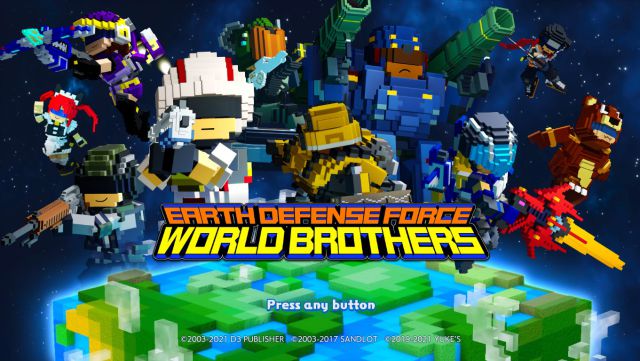 Earth Defense Force: World Brothers: We analyze the spin-off title of the well-known D3 Publisher franchise, which offers a more casual style while retaining its playable core. The Earth Defense Force franchise has undergone a drastic change in recent years that has made it one of the franchises that has gained a presence in the video game scene with each new installment. Initially a title within the Simple 2000 game series, where titles of very modest quality were offered at affordable prices and from where the Onee Chanbara franchise would emerge, the series would have several installments that would discreetly pass through the western market as minor titles . His jump to Xbox 360 with Earth Defense Force 2017 would begin to lay the groundwork for future games in the series in the West with a little more interest.

Later with EDF 4.1: The Shadow of New Despair, an improved version of the fourth installment of the series, and the fifth installment of the franchise appearing with new playable additions and improved graphic quality, in addition to reaching more platforms, the series gained more acceptance. among the public who saw that the formula of the series was entertaining. Ultimately, the launch of Earth Defense Force: Iron Rain, a spin-off title, has been one of the last games to appear and we will soon have the release of the sixth official installment of the saga. Meanwhile, Earth Defense Force: World Brothers comes to us, a title that maintains the playable essence of the series along with a plot and technical section in a casual style.

Earth has been invaded … again. The Terrestrial Defense Forces (EDF) face the new invasion with all their troops doing everything possible to prevent the advance of the aliens. However the situation becomes critical when the motherships attack the planet at the same time, dividing the planet into several fragments. Faced with this situation, the EDF decides that it is time to gather all its troops around the world, called World Brothers, to face this new threat and definitively end the invasion with the aim of restoring peace to the planet.

The main mode of the game is the story mode that offers the already known development through a wide range of missions in which the plot will gradually develop with new phases, which will take place in different locations on the planet that will include the streets of Tokyo, the Egyptian desert, New York, London or even Paris, each including characteristic details, in areas of considerable amplitude but also with limits in which, if they exceed them, they will make the characters fall into the void of space. In combat, up to four interchangeable characters can be carried in real time, which can be selected from a compendium of units that cover the different types seen in previous installments of the series, from the first of the PlayStation 2 era to the recent Iron Rain , and other coming from different countries of the globe.

The Flash: Leaked Making of Video with New Concept Art and...