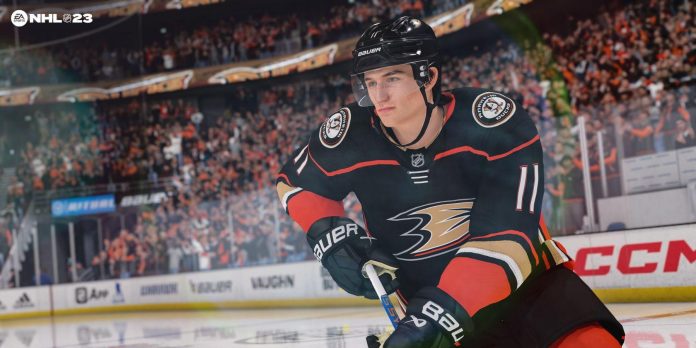 With the busy fall sports season approaching, EA Sports has begun preparing for the release of annual titles by several franchises. FIFA 23 has already received several trailers detailing new features and changes that will be the last EA Sports game with the FIFA brand. EA recently welcomed its new annual football title by releasing Madden NFL 23 last week. Now EA Sports is out on the ice, as NHL 23 has officially received its first trailer.

The trailer is a live broadcast of NHL 23 with online hockey personalities, including Anaheim Ducks mascot Wild Wing, playing an online match in NHL 23, featuring cover athletes Sarah Ners and Trevor Zegras. The trailer also features some footage of the latest NHL gameplay. like the introduction of new features that will appear in NHL 23. Gameplay segments demonstrate the new mechanics of the “last chance puck movement”, when a player can strike while falling. The trailer also reveals that NHL 23 will support cross-platform online gameplay for the first time in the NHL series.

The revealing trailer for NHL 23 doubles down on EA Sports’ recent efforts to promote inclusivity in their games. The popular NHL 23 Hockey Ultimate Team game mode will feature mixed teams for the first time, and previously NHL 22 featured women’s national teams. Since 2016, in the EA Sports FIFA franchise, women’s teams have been participating in annual games, and many fans are pushing for more content for women’s football. Players have been able to create female players in EA NHL games since NHL 11, but NHL 22 introduced the first all-female teams in the series.

The description of the video for the first trailer of NHL 23 also confirms the release date of the newest NHL game, which traditionally comes out simultaneously with the start of the hockey season. EA Sports announced that NHL 23 will be released on October 14 for both current-generation consoles and next-generation PlayStation and Xbox consoles. The description and official website of NHL 23 also hint at further changes to the NHL franchise, including a “redesigned strategy system” and an expanded customization of the game’s franchise mode.

NHL 23 comes as EA Sports is on the cusp of several major changes to its other annual sports franchises. It has been confirmed that EA is giving up the FIFA license after the release of FIFA 23, while the franchise will continue under the name EA Sports FC. EA’s attempt to get back into golf has also run into difficulties in recent months: earlier this year, EA Sports confirmed that the release of the EA Sports PGA Tour would be delayed until 2023. The release of NHL 23 in October will be a bright spot amid the ongoing difficulties for the EA Sports Gaming Dynasty.

MCU: 12 things we hope to learn more about at Comic-Con...