Home Entertainment E3 2021: Limited Run Games Confirms The Date and Time of Their... 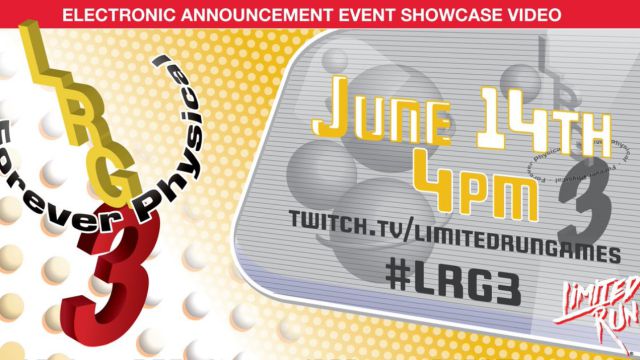 E3 2021: The company will not miss the big video game event this June with an hour-long conference; live, on Twitch.Limited Run Games has confirmed that they will hold a live conference within the framework of E3 2021. The great video game fair, the most media event of the year in the electronic entertainment sector, will have one more edition with the North American publisher and distributor; specialized in launching natively digital games —generally independent— in physical form.

It will be on June 14, Monday, at 22:00 (CEST), when Limited Run Games will hold its digital conference on the occasion of E3 2021. The first official information anticipates that everything will be concentrated in one hour (about sixty minutes) through your official Twitch account, where you can follow live.

The broadcast will feature more than 25 video games; These include “new games, physical editions of beloved cult games, and reprints of classic games.” The previously recorded video will be produced by Mega64.

It's about time for our annual very exciting electronic announcement event showcase video, produced by @mega64!#LRG3 2021 is stacked with over 25 physical game announcements. Join us live Monday, June 14 at 4 PM ET on https://t.co/vzY9JjjJzs. pic.twitter.com/JJbdUIoiOT

Just a few weeks ago we learned that Limited Run Games had reached an agreement with Xbox to start editing their video games also on Microsoft consoles; something that did not happen until now.

The company maintains its commitment to giving independent video games a second life, an exercise in romanticism for the most purists of the place by making a reality of having a box and cartridge (or disk) in those works whose original commercial projection did not include distribution physical, more expensive and risky. Generally, the editions of Limited Run Games are very limited, which in many cases causes problems to buy according to which editions – generally very careful and full of extras – and, consequently, uncontrollable speculation.

If we look at 2020, physical distributions of works such as GRAY, Return of the Obra Dinn, River City Girls, Shantae, Star Wars Episode I: Racer, Bloodstained: Curse of the Moon 2, Bug Fables: The Everlasting were announced. Sapling, My Friend Pedro, PixelJunk Eden 2, Kunai, Katana Zero, Grandia HD Collection, Carrion, Garou: Mark of the Wolves, Super Meat Boy Forever, TowerFall Ascension, Mighty Gunvolt Burst…. Among Us’s own will be out soon.

Dragon Ball Super, Chapter 73 Now Available: How To Read It...

Windows 10 Sun Valley: what we know about the update