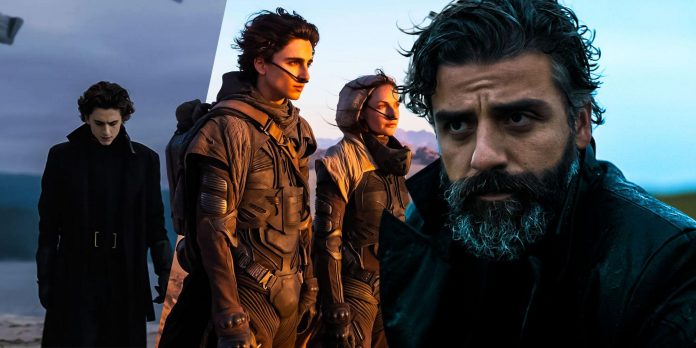 Warning: The following contains SPOILERS for the Dune books.

Denis Villeneuve’s first Dune movie dazzled audiences with its imagery and spectacle, immediately proving its most considerable controversy was incredibly dumb. The biggest Dune controversy was rooted in how the book is a complex, transhumanist epic about the dangers of messianic prophecies, which doesn’t immediately read as a fun affair. The film tells the story of three major groups: House Atreides, House Harkonnen, and the Fremen. In the movie, House Atreides assumes stewardship of Arrakis, the home of the Fremen, due to a royal decree. However, House Harkonnen, an ancient enemy of House Atreides, was previously in charge of the planet and its lucrative spice supply, so a conflict was inevitable. After the Harkonnens attack, Paul Atreides (Timothée Chalamet) and Lady Jessica (Rebecca Ferguson) escape into the dangerous deserts of Arrakis. Thankfully, Duncan Idaho (Jason Momoa), a swordmaster in service of House Atreides, and the Fremen could help them along the way.

Villeneuve achieved what many filmmakers thought was impossible: bringing a successful adaptation of Frank Herbert’s Dune to the big screen. With such dense material and in-depth lore, Villeneuve gambled on making a movie that only told half of Herbert’s first novel, thinking the fan response would be enough to warrant a sequel. The director’s gamble immediately paid off, as Warner Bros. approved another Dune film within days of its release. According to Villeneuve, he wants to create a Dune trilogy to capture Herbert’s sprawling story.

One of the most significant controversies of Dune was that the film wouldn’t be any fun, which the movie proves isn’t a legitimate criticism. The controversy came from Dune’s first images, showing a muted color palette, militaristic imagery, and an abundance of frowning. Fans immediately worried about whether the film would genuinely capture Herbert’s work and if it would have any joy or fun. After the movie’s release, it’s clear that this particular Dune controversy is ridiculous.

Dune Was More Fun Than People Gave It Credit For

Dune isn’t a comedy, but for fans of science fiction, impressive set pieces, martial arts, and tight scripts, it’s a fun watch. The film features breath-taking visuals of Arrakis and impressive effects, including the best onscreen version of Dune’s sandworms in movie history. The oppressive militaristic garb and colors make sense within the film’s context, and smile-inducing action sequences abound. The problem with the Dune controversy is that it doesn’t acknowledge that there’s so much more going on beneath the surface of Dune than a typical science fiction blockbuster. Villeneuve brilliantly fits extensive backstory and the task of building Dune’s world into a new kind of space adventure film. There’s obviously a bit of space-opera pomp and circumstance, but the dialogue especially has been adapted from Herbert’s work to scan more smoothly. It’s a problem that haunted David Lynch’s 1984 adaptation of Dune and is now smoothly ironed in Villeneuve’s Dune.

The film’s fun even extends offscreen. It’s hard not to find Jason Momoa infectious, as he’s clearly having a blast playing Duncan Idaho. His bear hug with Chalamet’s Paul Atreides seems like a genuine embrace between friends having a great time. The film’s fun even extends into the real world: Dune has inspired countless memes and jokes from viewers who can’t help but enjoy the unintentional silliness of the film. Chalamet’s odd sandwalk to avoid giant worms is a fan-favorite moment, and viewers also can’t get over the fact that Momoa’s character, a seasoned space warrior loyal to House Atreides, is hilariously named Duncan Idaho. The Dune controversy just doesn’t make sense.

Is Dune funny? There are no laugh-out-loud scenes, but there are enough organically funny moments that contribute to Dune’s complex world being conceivable and relatable for audiences. Apart from being a light moment, Duncan making fun of Paul’s wiry frame establishes their brotherly relationship. When a stone-faced Gurney Halleck (Josh Brolin) sarcastically tells Duke Leto (Oscar Isaac) that he is smiling as they formally receive royal dignitaries, this offers a glimpse at how the respective characters approach diplomacy, and is perhaps the strongest argument against the Dune controversy. However, the funniest thing about Dune might be Paul wanting to just have a normal day, but ultimately failing to delay Lady Jessica’s Bene Gesserit lessons or sword fighting lessons with Gurney – a sci-fi twist on the classic trope of a kid trying to skip school. Dune is funny at the right moments, and these scenes often also serve to provide more context about the world and characters or move the story forward.

Related: Villeneuve’s Dune 2 Follow-Up Is Perfect For His Next Sci-Fi Miracle

Dune 2 Will Be Darker Yet More Fun

The Dune sequel will see the fall of House Corrino, the destruction of House Harkonnen, and the rise of Paul Atreides – known to the Fremen as the messianic figure Muad’Dib – as the Emperor of the Known Universe. Things might become less fun in Villeneuve’s planned Part 3, which would be based on Herbert’s Dune: Messiah, in which Paul is helpless to stop the Fremen from slaughtering billions in his name. But before even that, Dune 2 will already see the hero breaking bad – a formula that has proven itself time and again to be a fun and thrilling watch.

Dune 2 will cover the second half of Frank Herbert’s book, and it will also feature Christopher Walken as the Padishah Emperor Shaddam Corrino IV, Florence Pugh as Princess Irulan, Austin Butler as Feyd-Rautha Harkonnen, and Lea Seydoux as Margot Fenring. Dune: Part 2 is going to be a ‘thopter-load fun movie for audiences that love well-written espionage, mysticism, futuristic biotechnology, and razor sharp politics. Compared to the first half of the book in which Villeneuve and the crew spent most of the time world-building, Dune 2 looks set to build a rollicking ride out of the much more exciting but also darker second half.

Laser Baby boys may portend the turn of season 3