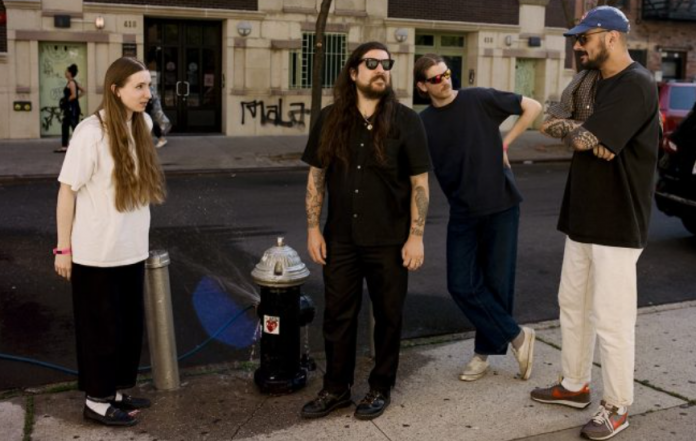 It’s a pity that Dry Cleaning is so often talked about simply as a post-punk band or, even worse, mixed with the “sprechgesang” movement. This is a band of four guitarists, and Florence Shaw’s performance fluctuates between singing and speaking, but such comparisons should end there. Anyway, on his second album “Stumpwork”, the dry cleaner proves that they are unique.If we approach the record from the point of view of the main genre descriptors, then at different times the record resembles charming jangle-pop (“Gary Ashby”, “Quenchy Coops”), drugged ambient (“Anna calls from the Arctic”) and slacker rock. (the hackneyed looseness of “Icebergs” and “Driver’s Story” is the antithesis of post—punk piquancy). The ambitious abstract noise that the band explored in the interlude to “Every Day Carry”, the final part of their debut album “New Long Leg”, is difficult to glue the extremes of the album.

However, more interesting than genre tags are the strange combinations and juxtapositions that the dry cleaner finds in this combination of influences. “Hot Penny Day” begins with a puffing funk number with heavy bass, and then turns into an explosion of psychedelic rock with a saxophone. The slowly shimmering guitars in “Driver’s Story” look as if the shoegaze riff has been hollowed out to leave a strange and intriguing shell.

Then there’s the Show’s vocals—itself an ever-changing presence. Another common cliche about dry cleaning is that its lyrics relate to everyday life, and it’s true — the themes on “Stumpwork” include car boot fairs, bare wires and people looking out the windows — but that doesn’t mean they’re banal. She shows that normal life can be surreal, for example, when the narrator of “Kwenchy Kups” imagines how he wraps around another person and turns into a shoulder bag, or when in the title track a bag of garbage and food is mistaken for a child.

This can be silly, for example, when the titular turtle runs away in “Gary Ashby” or when the concept of “shrink” arises in “Anna calls from the Arctic” (its meaning is unclear, but it is clearly an act of light malice). and it may be too serious. “No Decent Shoes For Rain” was heavily influenced by grief; some band members lost close relatives during the recording of Stumpwork.

The show’s lyrics also hint at a broader political picture. “I see male violence everywhere,” Shaw sings on “Hot Penny Day.” “Nothing works, everything is expensive, opaque and privatized,” she says in “Anna Calls from the Arctic,” a topic that is more explicitly revisited in “Conservative Hell.”

All this is presented as a modernist stream of consciousness, suddenly jumping from one direction to another, as in an experimental novel. Combined with the agility and scope of the rest of the band members, a record is obtained that, if given the necessary time and attention, offers unfathomable depths to explore.

Pokemon Fan has put together an updated version of the Pokemon...