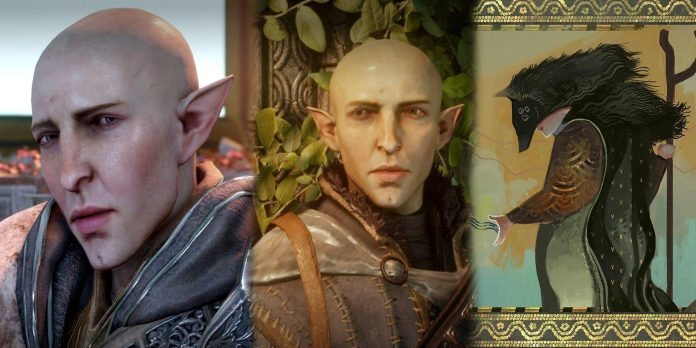 First announced at The Game Awards in 2018, fans have been drip-fed information about the fourth mainline installment in the Dragon Age series ever since. The development for the next Dragon Age game has been tumultuous, to say the least, with a few massive changes in direction from a single-player narrative experience to a live-service multiplayer title like the ill-fated Anthem and back again. The ever-changing format and some other issues prompted a few high-profile staff turnovers, but it seems like Dragon Age: Dreadwolf is finally back on track.

Dragon Age: Dreadwolf may not have a release date yet, but BioWare has slowly been revealing more and more about the upcoming game, like its Tevinter Imperium setting, a glimpse at some of its characters, and the hugely significant name reveal. The fact that Dragon Age: Dreadwolf’s name indicates that the fan-favorite elf Solas will play an important role wasn’t the only interesting revelation, as it also meant the game would be a direct sequel, unlike previous entries. Dragon Age: Inquisition already explored some of Solas’ past, but Dragon Age: Dreadwolf should take this a step further and really delve into the origins of the mysterious mage.

It’s clear that Solas will be playing a pivotal part in the next game, and this has fans excited for several reasons. Dragon Age: Inquisition was well-received for its storytelling, gameplay, and worldbuilding, but some felt that its main villain was a little lacking. Corypheus might be a returning figure from Dragon Age 2’s Legacy DLC, but players never really got to spend much time with the darkspawn entity or learn all that much about him. Gamers have already spent an entire game with Solas as a companion, and even had the option to romance him if their Inquisitor was a female elf, so there’s already an established connection and a complex backstory.

Not only is Solas more of a well-known character than Corypheus, but he’s also more of a sympathetic villain. The players already have a personal relationship with him, which will count for something even if they’re no longer playing as the Inquisitor, especially if returning characters like Varric and potentially Dorian make a comeback. Solas’ goals are also more understandable than previous antagonists, considering he is trying to remedy some of his past mistakes and just wants to make a better world for his people.

While restoring the Fade and tearing down the Veil will be beneficial to some and could restore the previous world order, it could also lead to plenty of death and destruction, which complicates things considerably. Having a nuanced and fairly sympathetic villain can make a narrative so much more rich and compelling, and it seems like Dragon Age: Dreadwolf is setting up a pretty intriguing plot.

During the main campaign, players could get to know Solas as one of their companions. The elven mage did open up a little over the course of the game, and players could see how much he cared about spirits and the Fade during his companion quest All New, Faded for Her. However, he still remains a mystery, and even as a romantic interest he keeps up plenty of walls and avoids letting people in. Although there are several subtle hints throughout Dragon Age: Inquisition, the reveal in the game’s final moments that Solas is the Dread Wolf and was responsible for Corypheus obtaining the orb was a shock to players and left many questions unanswered.

Gamers were able to learn more about Solas and his motivations at the end of the Trespasser DLC, which provided some vital bits of missing information. By exploring the worlds in the eluvians, players could learn a little more about the Dread Wolf’s past, but there are still plenty of gaps. Fans learned that he was the one who created the Veil in order to punish the elven gods for their avarice and their role in killing Mythal, and in doing so he was inadvertently responsible for the downfall of his people and their loss of magic and immortality. These are key bits of backstory, but they are barely touched upon in the DLC. Dragon Age: Dreadwolf has the chance to explore Solas’ story in much more detail, making him not only a more unique antagonist but also revealing more about the elves and the history of Thedas in the process.

How Solas’ Story Reveals More About The Elves

Elven culture is peppered throughout the previous Dragon Age games, and players can learn as much or as little as they want by engaging in dialogue with different characters, reading flavor text, or exploring the world around them. The tension between the downtrodden city elves and the tradition-obsessed Dalish is an interesting dimension to the representation of the race, and throughout Thedas, the elves have a varied and tragic history that underpins some of the main story beats.

Fen’Harel, also known as the Dread Wolf, is featured all the way back in Dragon Age Origins, although his significance isn’t necessarily obvious until the third game and its DLC. There are many different stories about the so-called trickster god that players could encounter, and through them, a picture begins to build not just regarding the Dread Wolf’s origins, but also regarding the fate of the elven people. Magic, the Fade, and the Veil are major parts of Dragon Age’s lore and overarching story, and the Dread Wolf is a key figure in understanding them.

Not only does the name Dragon Age: Dreadwolf suggest that Solas will be taking center stage in the next game, but it also implies that the plight of the elves and the Fade will as well. ‘Dreadwolf’ is an anagram for ‘Fade world,’ after all, but Solas’ plan and goals revolve around the elves and restoring their previous powers and position through the destruction of the Veil. Considering how important this is to Solas’ goals, it makes sense that Dragon Age: Dreadwolf will explore the fate of the elves and their history more fully in order to contextualize Solas and his plans. Centering the exploration of elven lore around Solas and his own past is the perfect way to humanize the antagonist, create sympathy for the elves, and add further complexity and nuance to the entire game’s story.

Thor 4: Russell Crowe is confirmed in the film’s cast