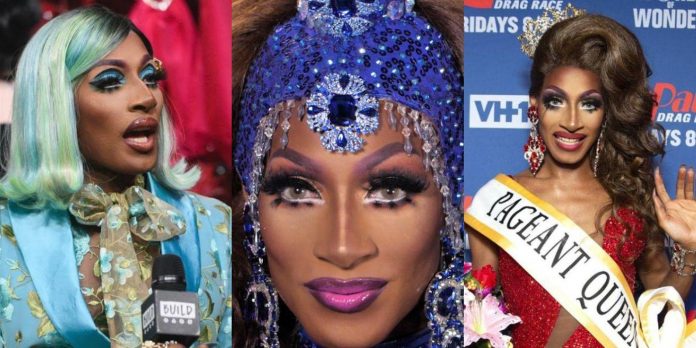 RuPaul’s Drag Race All Stars 7 has invited back some of the previous winners in the franchise to compete once again. Some queens in the current competition’s roster include Jinkx Monsoon, Yvie Oddly and Raja Gemini. Season 12’s iconic winner Jaida Essence Hall, who won from home due to the COVID-19 filming protocols, has also joined to acquire the prestigious title Queen of all Queens.

During her season, Jaida proved that she’s much more than a pageant queen. The queen from Milwaukee has also served some of the best gowns on the runway and showed the judges that she’s also capable of eliciting laughs. During her stint on Drag Race, some unforgettable and notable quotes came out of Jaida’s mouth.

She’s Beautiful And She Knows It

On RuPaul’s Drag Race, it’s important that queens nail their entrance look. When it was Jaida’s turn to walk inside the workroom and introduce herself, she came in wearing a beautiful blue gown that showed off her gorgeous shoulders.

During a confessional, Jaida introduced herself by saying, “It’s Jaida Essence Hall, the essence of beauty.” Jaida puts her time and effort into being the essence of beauty, as seen in her entrance look. She is a very polished queen who makes sure that everything about her is on point, from her makeup look to her outfit.

A Face Beat For The Gods

Considering herself as the essence of beauty, Jaida doesn’t step into the challenges or the main stage without looking gorgeous. When she was creating the ad for her fake product “Luxuratuck” Tucking Panty, Jaida didn’t waste any time emphasizing how beautiful she looked.

In her ad, Jaida said, “I know what you’re thinking: ‘Damn, she’s snatched.’ And you’re right. I am.” She might not have disclosed this during the competition, but Jaida must be capable of reading the viewer’s minds.

A Pageant Queen Through And Through

“A Pageant Queen Should Always Be Prepared.”

Plenty of pageant queens have joined RuPaul’s Drag Race, including the Queen of the North Brooke Lynn Heights and Season 5′ Roxxxy Andrews. But arguably, one of the most polished pageant queens in Drag Race history is Jaida Essence Hall.

In an interview with RuPaul and Raven, Jaida says that “A pageant queen should always be prepared” and do whatever it takes to win. That’s exactly what Jaida did throughout the competition, seeing as she won against other formidable queens like Gigi Goode and Crystal Methyd.

In RuPaul’s Drag Race, the queens have to prove to the world that they are well-rounded performers. That’s why during her season, Jaida had to step out of the pageant queen box and show to the judges that she’s also good at doing comedy.

In a maxi challenge where they had to debate other queens to become America’s first drag queen president, Jaida chose a character and stuck to it. Jaida proclaims to make America confused again, and in line with that, she distracted the panelists by randomly screaming “Look over there!” when she was asked a difficult question. Her comedic ability and dedication to her character have allowed her to rise to the top during the challenge.

During the 10th episode of Season 12, a handful of the show’s superfans were lucky enough to be made over by the contestants. Jaida chose Bethany, as she thought that the superfan has a wild side that needed to be released with her help.

Jaida also made it known to Bethany that she’s very competitive and that “if she does not win”, she shouldn’t bother to come home. While this was said in jest, Jaida infected Bethany with her refined demeanor and they showed the best family resemblance of the main stage.

The Shade Of It All!

There are plenty of scandalous moments in Drag Race herstory including controversial eliminations and disqualified contestants. One contestant in Season 12 of Drag Race, Sherry Pie, was rightfully disqualified from the competition as people came forward and accused her of sexual misconduct.

During the Season 12 reunion episode, the queens had a group number where they sang “We were 13 queens competing all together”. Jaida broke the moment up by saying “Well, technically only 12,” shading the disqualified contestant one last time.

“I Would Like To Say That If You Can’t Love Yourself, How The Hell Are You Going To— Look Over There!”

After a long season that was upended by the COVID-19 pandemic, Jaida proved to the judges and to the viewers that she has charisma, uniqueness, nerve, and talent, and deserves the title of America’s Next Drag Superstar.

Mama Ru asked Jaida if she had anything to say after winning the crown, Jaida referenced an iconic RuPaul catchphrase, as well as herself by saying, “I would like to say that if you can’t love yourself, how the hell are you going to— look over there!” What a perfect way to end an almost flawless run on the reality TV competition.

She Knows How To Crack Jokes

As a previous winner in the franchise, it might have been a nerve-wracking experience for Jaida to join the competition once again. The first time around, she had to break out of the pageant queen stereotype and prove to the people that she’s also smart and funny. That’s why she couldn’t help but crack a joke when she first appeared on screen for All Stars 7.

After her entrance line, “Hey, bitch, she’s back?”, Jaida followed it up with “America, I’m your favorite bottom.” While she won her season for being a balanced performer, Jaida is also extremely charming thanks to her personality and jokes. So, there’s a strong possibility that she would’ve won snatched the Miss Congeniality award during her season.

“You’re The Realest Bitch I Know From The Knees Down.”

Any Drag Race contestant knows that reading other queens is fundamental. For the first episode of All Stars 7, RuPaul thrust the queens into a reading challenge where they had to be as shady to each other.

During Jaida’s turn, she gave her fellow winner Trinity The Truck a backhanded compliment by calling her the “realest bitch” she knows, but only “from the knees down.” Despite not being a reading challenge winner in Drag Race, Jaida sure can read someone for filth when needed.

Snatch Game is one of the most difficult challenges the queens must overcome in Drag Race. They have to perfectly impersonate a chosen celebrity, and at the same time, make sure that they’re making Ru and the audience laugh.

Jaida is not known to be a great impersonator, that’s why when she chose to do Prince for Snatch Game, she worried a lot of her fans. Thankfully, Jaida pulled it off by playing off Prince’s sexiness and creating her own interpretation of the musician while still being funny. She even made RuPaul and Michelle Visage blush by simply saying, “I’m sexy.” Because of her hysterical Prince impersonation, Jaida didn’t receive any negative critiques during that week.

Clerks 3: The 10 Best Callbacks in the Trailer