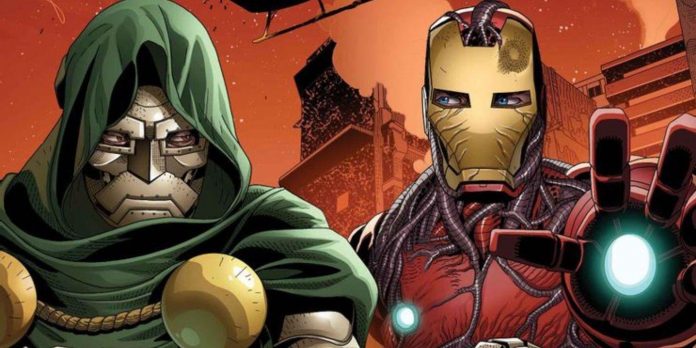 In the catastrophic future, the Hulk turned into a power-hungry dictator named Maestro. One villain who has come out against him is Doctor Doom. The maestro thought he had killed Doom, but instead just crippled him. To plan his revenge, Doom joins the original Human Torch, as well as Neymor the Submariner. He even wakes up the Hulk’s old villain, Abomination, but this plan backfires as Abomination teams up with the Hulk to invade Doom’s new operational base.

In the final issue of “Maestro: World War M” by Peter David and Sebastian Cabrol, the Maestro quickly deals with the robots Doom and Namor before meeting with Dr. Doom himself. But Doom does not appear in his standard armor. Instead, he arrives in an enhanced version of his armor that resembles something similar to the Iron Man Hulkbuster suit. After the initial attack, it seems that Doom can give battle to the Maestro. But unfortunately, the Abomination interrupts the fight by hacking the Human Torch and causing it to explode.

It’s a pity that this fight never took place because of the explosion of the Human Torch, because it represents an alternative view of what fans have seen countless times. Iron Man’s Hulkbuster and the Hulk have repeatedly clashed with each other. But it would have been an interesting twist in that fight. Instead of the usual Hulkbuster, it would be the Hulkbuster version of Doctor Doom, fighting not only the usual Hulk, but also the Maestro, a version of the Hulk known for his ruthlessness and never held back.

Although the armor doesn’t appear for long, it would be nice to see Doom’s thought process when assembling it. Doom is known as a selfish inventor. He considers himself superior to everyone else both in mind and body. So he must have been pretty humiliated by the Maestro to humble himself enough to use Tony Stark’s design for the Hulkbuster armor. Of course, all the heroes are gone on this timeline. Therefore, it is unclear how much Dr. Doom influenced Iron Man in developing his own version of the suit. But the similarity is quite strange, and hopefully in the future fans will see more of this Hulkbuster, Doctor Doom.