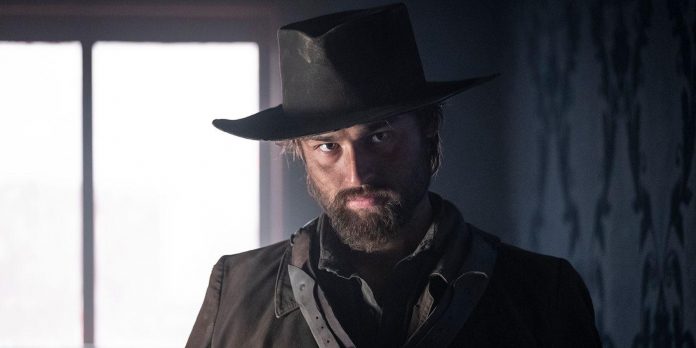 The Spaghetti Western is making its stylish and bloody return with That Dirty Black Bag. The AMC series centers on a bounty hunter named Red Bill as he sets out on a quest for revenge over a loss from his past, only to find his journey intertwined with that of a local sheriff with his own past demons.

In honor of the show hitting shelves on Blu-ray and DVD, Screen Rant spoke exclusively with star Douglas Booth to discuss That Dirty Black Bag season 1, his prior friendship with Dominic Cooper, season 2 plans and more.

Screen Rant: As someone who grew up in the States, I know very well that kids often go through a cowboy phase where they dream of getting to live in the Old West. Having grown up in the UK, did you have a similar phase at any point in your early life?

Douglas Booth: Well, for me, I started riding horses when I was five years old, so I always had a love of horses. The idea of being able to do a job where I could ride was unbelievable to me. I think there was times when I was riding along that I was like, I’d seen Westerns, in our country on Saturdays, Westerns played all day on this channel I had on my TV. I’d watch them purely for the horses, because I just love horses, love them when they’re riding. This was definitely a pinch-me moment when I was in Almeria on the plains and just getting to gallop full pelt across the horizon I was like, “Yeah, I’ve chosen the right career path,” I was very happy about that.

What was it about That Dirty Black Bag, outside of your love for horses, that really kind of drew you to be a part of the show?

Douglas Booth: I love the scripts. I thought they were full of really interesting characters, they’re all quite complex, I found the characters interesting. Also Dominic Cooper is a very good friend of mine and he was already attached and it was filming in Almeria and in Spain and in Pula in Italy and in the Sahara desert in Morocco. It felt like a great adventure that I wanted to go on with friends and we had a lot of fun.

Speaking of Dominic, you two share a lot of screen time together in this series. Even though you had that prior relationship, what was it like building the specific rapport for your characters?

Douglas Booth: I think we we naturally have a rapport and I think that’s kind of one of the reasons we also thought it’d be fun to play these sparring characters. We wind each other up a lot, I actually went to his mother’s nursery school, so, even though he’s a lot older than me — he’d hate me for saying that [Chuckles] — I’ve known him for a long time. We know how to get under each other’s skin and wind each other up and read each other, so that was naturally there for us. It was just about making sure that we tried to allow that to continue on screen and not suddenly stop that kind of energy when we were playing these other characters that weren’t ourselves.

Billy has quite the emotional arc, just in this first season. What was that like for you getting to the heart of your character?

Douglas Booth: For me, it obviously started with his relationship with his mother. He’s obviously a very damaged individual, but for me, it was quite simple, I’m very close to my mother, I was always a bit of a mama’s boy. [Chuckles] I used to have recurring nightmares as a kid about losing my mom, it was a bit dark, so I think that was a very easy thing to connect to and I thought it was a great place to start.

Then it was trying to just get to grips with what has happened with this guy up to the point that we meet him in this story, that has brought him to that place. I just did some searching and figured out what I thought had happened and I think you’ll probably find out more about that as the series goes on. It’s the same way I approach every character, but I thought it was very simple, the super objective he had, which is quite satisfying to play as as an actor.

Speaking of his objective, I love the physicality of his character, whether it be with the guns or the axes. How much of that stunt choreography were you involved with? Did you actually practice the axe throwing for the character?

Douglas Booth: Yeah, what P.J. Dillon, our DP, had done is amazing. I think he’s shot it so beautifully, it’s a really stunning looking show. He’d done a lot of work on Game of Thrones and he’d done all the original series of Vikings and stuff like that, he had a lot of experience with axes. Along with the stunt coordinator, he was always there to make sure it felt authentic, we were given fake plastic guns.

It was during COVID, we had to quarantine in our hotel for two weeks to start with, there was a lot of time and they gave me the axe, the full-weight one, and there was lots of time to get used to it and make it feel like it was something that I had a lot more skill than I actually do. [Laughs] There was only once where I was literally throwing it right down the lens where they were like, “Here’s a green stick or something, you’re not throwing that thing at us.” [Laughs]

Speaking of action scenes, you have quite a few fun ones, my personal favorite is the bar in one of the later episodes. Did you have any that you personally enjoyed working on the most?

Douglas Booth: That definitely was very satisfying. I really enjoyed that moment because, I don’t wanna give too much away, but for the first good portion of the series, Red Bill is tied up. [Chuckles] It was fun when he actually got his hand hand on a gun and you suddenly learn very quickly what he can do with it, so that was a lot of fun. Although smashing a guy’s head repeatedly into a table took a little consideration, because he had to walk towards me and I had to slam it down, but make it look realistic, I think he may have had a little sore head by the end, but we did put a pad on the table.

One of the scenes that I enjoy, obviously, is the great duel in episode eight. It was fun because it really was like a great homage to the Spaghetti Western and you could feel that moment, that sort of The Good, the Bad and the Ugly vibe. We were in this amazing location, that took like four or five days to shoot, there was so many different elements. But I quite enjoyed when I threw the axe and took out a certain character. I quite enjoyed that moment.

That was a pretty epic moment. Speaking of Spaghetti Westerns, I love how this show walks this tightrope between so many different genres, be it Spaghetti Western, Weird Western, profound revenge drama, what was it like for you navigating those various tones?

Douglas Booth: You know what, for me, it kind of wasn’t my responsibility in a sense. I’m coming as a character and I’m trying not to get too much involved in the technicality, I’m not obsessing over what the shots are, I’m trying to stay present and be with my fellow actors. So really, that’s the mastery of the director and director of photography, who are really bringing those themes and those elements.

Obviously, when you’ve got Aidan Gillen torturing you, I’m aware that maybe I’m in something that’s got a horror slant to it, but that that’s fun. I’m not a huge horror movie fan myself, but I love acting in them. When characters are pushed to the limit, I find that — shouldn’t say pleasurable — quite fun to do. When your character is really being pushed, you can’t get more present than that.

Those scenes you have with Aidan are quite the nail biters almost. When I first read about this series, I remember reports saying there was a three-season plan. Can you give us an update on how we’re looking for the future of the show?

Douglas Booth: What I can tell you is that the writers are writing a season 2. It’s meant to be three seasons. They’re writing season 2, I think they’ve got their own story, and now they need to take it to AMC for the official greenlight.

Fingers crossed, because it is left on a cliffhanger, so a lot of people want to know what’s happened. But, for myself, to see this character through and for the audience, who I think have very generously and faithfully followed these characters, I hope it happens, but it’s looking like it’s moving in the right direction, I’ll put it that way.

In the debut season of THAT DIRTY BLACK BAG, in a town full of bounty hunters, bandits and bloody vendettas, Arthur McCoy is the incorruptible sheriff who’s trying to overcome his troubled past to bring law and order to this new frontier. On the other side of things is Red Bill, an infamous solitary bounty hunter known for decapitating his victims and stuffing their heads into a dirty black bag.

When the paths of these two men collide, they both learn that in the wild west, there are no heroes, nobody is invincible, and the predators may become the prey.