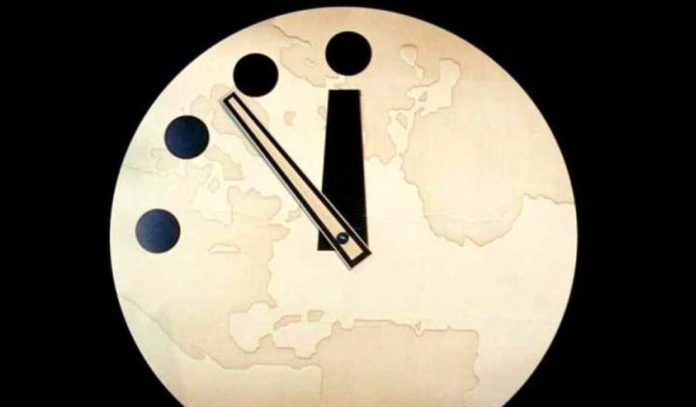 Doomsday Clock is closer to the end in its history than ever in the past year, and the Bulletin of Atomic Scientists states that this is unlikely to change unless humanity changes its behavior.

The Doomsday Clock, a symbolic clock that shows the time when the world will “end” by the human hand, was fixed at 100 seconds to midnight as the coronavirus pandemic affected the whole world last year, and in a sense, it showed that the world is closer to the apocalypse than ever before.

A year has passed, but the doomsday clock has not gone a second from where it was. The newly published Atomic Scientists Bulletin states that the fixing of the clock at the point it reached last year is due to “the inadequate and ineffective intervention of the world governments in the coronavirus panemia”.

In the newsletter, it is also stated that “there are multiple causes that create the threat of apocalypse, and humanity must set new norms of behavior in order for the scorpion and the minute hand to go back.”

According to the newsletter, the COVID-19 pandemic has shown the whole world “how unprepared and unwilling to respond properly to global emergencies”. Still, the decisions of the new US President Joe Biden, who took office 8 days ago, to return to the Paris Climate Agreement and to membership of the World Health Organization (WHO), are said to provide hope for the tensions to drop to a bit.

Regarding the behavior of the world’s governments towards the pandemic, Rachel Bronson, Head of the Atomic Scientists Bulletin, said: “In this time of real crisis, governments around the world have often shunned responsibility, ignored scientific advice, did not cooperate to communicate effectively, and consequently protected the health and well-being of their citizens. failed ”he said.

See Also
DOOMSDAY CLOCK, ARE WE 100 SECONDS OF THE APOCALYPSE?