Home News DOOMSDAY CLOCK, ARE WE 100 SECONDS OF THE APOCALYPSE? 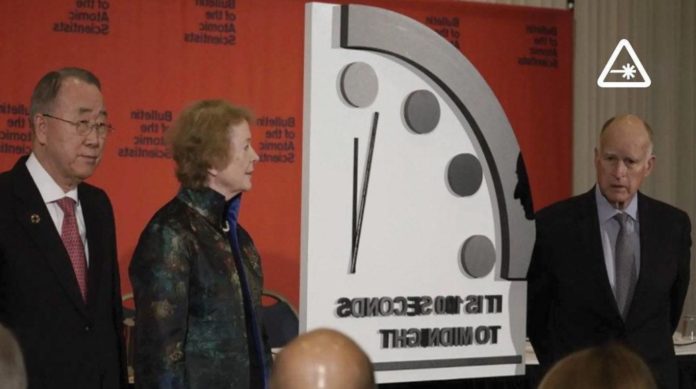 We must admit that 2020 has not ceased to surprise us, and we are still in January! Sadly, most of these surprises have not been pleasant, from a possible Third World War to the outbreak of a virus that could cause a pandemic, there is no place for calm here.

Today was the Doomsday Clock that caused the restlessness of the world, after scientists announced that they changed the position of their hands indicating that there would be only 100 seconds left for the beginning of the apocalypse.

WHAT IS DOOMSDAY CLOCK AND HOW DOES IT WORK?
It is a fictional clock that metaphorically indicates that the human species is about to become extinct due to the occurrence of different phenomena that could be of high risk to humanity and midnight being the moment in which life would cease to exist as we know it.

Humanity is closer to annihilation than ever before, according to the scientists behind the “Doomsday Clock”​. The time has moved to 100 seconds to midnight – much nearer to catastrophe than the scientists have set the clock in the more than 70 years it has been around. To read more, click link in bio #doomsday #doomsdayclock

The advance of the hands responds to a series of conditions, such as threats of an environmental or technological nature. Two years ago the world was alerted saying that we were only 2 minutes from midnight, however, today this brand has been reduced to only 100 seconds.

The announcement is intended to alert the population, as well as create awareness to begin taking measures that benefit humanity and the planet.

Do you think we can save humanity from a catastrophe? Leave your comment.