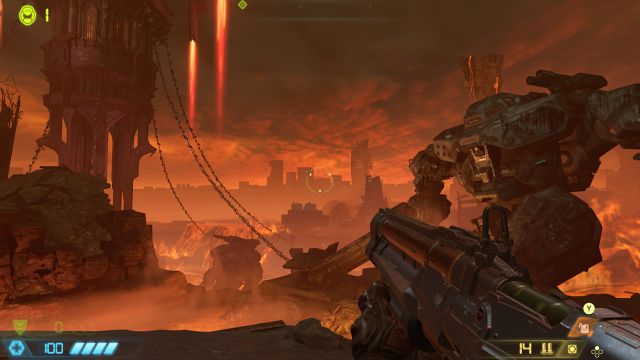 Panic Button does it again and Switch benefits from one of the most important games of 2020. The study does not seem to have limits, neither does the console

It’s nice to see such good relationships. With the arrival of Doom Eternal to Switch we have the infernal id Software family well nourished on the Nintendo machine (with special mention to the precious Doom 64, also recently released). And the matter is not trivial, because if it was already difficult to imagine the 2016 Doom on the Kyoto console, Eternal made us have doubts due to its greater technical requirement.

Well, we can say that there is nothing to fear, Panic Button has done it again, and although the effort was greater this time, the experience acquired with the carrying of the previous iteration of the saga has served to deliver with Eternal a worthy version of the powerful tabletop game. Miracles can happen in hell itself.

As usual in these cases, we redirect readers to the original review of the game that we published at the time. Written by Sergi Motenai, one of our most gifted analysts for games of this type, you will find there all the details that have made Doom Eternal a fixture on all the best games of the year lists. You just have to take into account the usual in the versions of Switch: the lower numbers in the framerate and in the resolution, the rest is just as you can read in that great text. We will therefore focus on the particularities of this version and what users of the hybrid console can expect in terms of quality.

The wizards of Panic Button

Founded by former Acclaim employees, Panic Button were among the first studios to have access to Switch hardware. Years before they had already worked closely with Nintendo and Nvidia on the console that would be launched in March 2017. In that sense, it is understandable that they are light years away from other companies that are responsible for transferring desktop games to the laptop.

Only Feral Interactive (responsible for the absolutely incredible port of the beloved Alien: Isolation and the stupendous Grid, which is only weighed down by Switch’s non-gradual triggers on the throttle) and Saber interactive (authors of that otherworldly port that is The Witcher 3 of CD Projekt RED) can look Texans face to face.

Having a deep understanding of the possibilities of the machine is not synonymous with infallibility. There we have Virtuos, who sinned in confidence after his celebrated ports of Dark Souls or the Spyro and Bioshock trilogies. Their statements that nothing was impossible for them on Switch, that they would even get quality ports of next gen games, reality was given a bath in a game of the then current generation (although in principle not too technically demanding) such as The Outer Worlds .

Panic Button has his contributions for successes in complicated titles such as Doom of 2016 and Wolfenstein II: The New Colossus, each more surprising. They are also responsible for the port of Doom 3, which was accompanying the landing of the saga on Switch along with the classics Doom and Doom 2, and New Blood, the spin off of Wolfenstein II. Of course, they are also guilty that Warframe works so well on the Nintendo console. They do not appear to be reaching their limit, and we hope they will continue to do so for a long time.

Panic Button had been involved from the beginning of the development of Doom Eternal with Bethesda and iD Software to bring the game to the Switch. Important details such as having to work on the new id Tech 7 engine and the arrival of the pandemic took several months from the original launch of the game on desktop and PC platforms in that fateful March 2020 until the arrival in December on Switch. .

In an interview on Nintendolife with Cody Nicewarner and Travis Archer, two prominent members of the study, it is revealed how id software took into account the version of Switch from the first moment. It was not, therefore, a second-class console but the thought of Doom Eternal encompassed all consoles equally. The new engine was designed to take advantage of the latest PC technology and squeeze the power of PS4 and One, so the challenge of Panic Button was enormous.

The involvement from the first moment strengthened the feeling of a continuous work in progress. The engine was receiving updates that had to be analyzed in the study, some benefited the development, others complicated it. The bottlenecks of a less powerful console had to be dealt with carefully, seeing what could be subtracted from the final design without compromising quality. Not only was the Switch’s capabilities tested, but the scalability of the new engine. For the rest, as additives in the notebook, we worked on a more legible hud and the use of gyroscope pointing, a characteristic that is always appreciated in a shooter.

The most important features of Xiaomi MIUI 12 have appeared!