Home Entertainment Don’t Look Up, Criticism. A Terrifying And Forceful Satire Of Our Reality 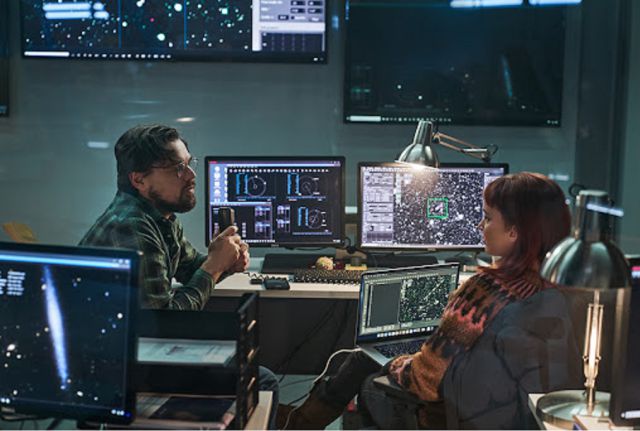 Don’t Look Up: The film starring Leonardo DiCaprio and Jennifer Lawrence shows humanity’s reaction to learning that a meteorite is going to destroy the Earth. Drawing parallels between the reality of the world and the one portrayed by Don’t Look Up is inevitable. The new Netflix original film has not been conceived as a metaphor for the crisis humanity is going through with the COVID-19 epidemic, but the reactions shown in the film are so familiar that they cause some uneasiness in the viewer, when not feelings of terror. Director Adam McKay caricatures the human response to a life or death situation, although what is truly disconcerting is that this humorous vision accurately approaches what we have been experiencing for almost two years.

It all begins when doctoral student Kate Dibiasky (Jennifer Lawrence) gazes at the stars and discovers an anomaly. Excited, the girl communicates it to her teacher, Dr. Randall Mindy, played by Leonardo DiCaprio. Together with his team from the University of Michigan, he performs all the calculations to discover a terrible truth: the meteorite that is approaching the Earth, several kilometers in diameter, will hit the planet and generate tsunamis and earthquakes that will destroy life and with our species. And there are only six months left for it to happen.

Crossing the web of interests and selfishness

With all this data under their arms, the duo alert the relevant bodies and find themselves with a wall of bureaucracy and interests. Meryl Streep puts herself in the shoes of the president of the United States, a cynical character that she does not see beyond the electoral polls and her own navel, as does hers son Jason (Jonah Hill). For this reason, when they finally take a look at the report, they refuse to make a move until the electoral process is over.

The society of images and the instantaneous is consumed by social networks and by junk programs. In this context, the media seems to limit itself to bombarding viewers, listeners and readers with messages lacking in content, sweetening or completely ignoring reality. More than good stories, the click and the algorithm matter, an acid criticism of journalism that continues to draw the caricature of the current era.

When Dibiasky and Dr. Randall turn to The Daily Rip, one of the hottest shows of the moment, they are frustrated that the two hosts, brilliantly played by Tyler Perry and Cate Blanchett, are more interested in the breakup of pop star Riley. Bina (Ariana Grande) than at the end of the world.