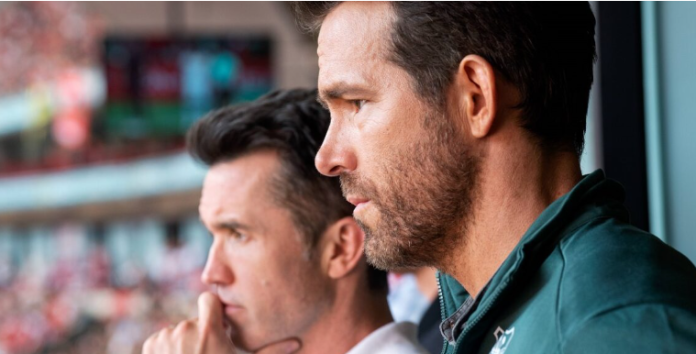 The whole world knows about the love of Ryan Reynolds and Blake Lively for each other. Now that the couple is having their fourth child, they are over the moon right now. The actor was also busy with his Wrexham Association football club. If an actor needs a little love and support, it’s understandable, isn’t it? But Rob McElhenny doesn’t agree that Reynolds is hugging someone other than him. So, when the Deadpool actor hugged this man, Rob officially declared his jealousy.

If you want to know the true meaning of the word “bromance”, you should watch “How I Met Your mother”. In the series, Barney Stinson, played by the very famous Neil Patrick Harris, really represents the meaning of bromance. However, these three friends, Marshall, Ted and Barney, are all three connected by the same bond. But it looks like we have a new duo for this term. Who did Ryan hug, which made Rob jealous?

Who made Rob McElhenny jealous when Ryan Reynolds hugged him?

If a husband gets close to his wife, this is normal and no one should be jealous. But here Ryan did not get close to Black Lively and, therefore, with jealousy. Since Rob and Ryan own a football team together, they have become very close to each other. And now, if the actor of the “Adam Project” approached another person, it caused Rob a slight envy. Below you can see how Rob reacted when Ryan hugged this man.

.@RMcElhenney & @VancityReynolds have officially made it to the jealousy phase of their bromance. pic.twitter.com/8G8dsy3jt3

Funnily enough, it’s true that when Ryan hugged Kevin Mulholland, Rob’s reaction was, “Kevin, don’t hug him…” Well, it’s now officially stated that Ryan Reynolds is “now everyone’s best friend,” which worries McElhenny. . No wonder Blake Lively once threatened to kill Rob McElhenny! Kevin Mulholland is the head of sports medicine and sports science at Wrexham A.F.C. But it pains Rob to see that Kevin and Ryan get along great with each other.

Well, Blake Lively once told me that she made a list of people she could date if she lost her husband. What would Rob do if the Green Lantern actor got too close to someone else? Rather, what would Rob literally do if Ryan really was everyone’s best friend? Do you also have a friend whose closeness to others bothers you?

What would you do if something like this happened to you? Tell us about your crazy ideas in the comment box below.